A greater education in media literacy could help young people think critically about the overwhelming amount of images presented to them every day.

Reflecting back on my K–12 education, I find that one very important thing was lacking: How to navigate media. Media is, of course, a broad term. The internet, television, film, books, music, video games, advertising, social networks, and even the magazine you’re holding right now are all considered media. What confounds me is the little value placed upon a deep understanding of how to read different types of media.

Media literacy doesn’t have an easy definition, but the National Association of Media Literacy believes that it allows the individual the power to “access, analyze, evaluate, create, and act using all forms of communication.” To know what a piece of media is telling you, to think deeply about it, and to form your own opinions on it is to be media literate. Likewise, media literate people can effectively create their own media and use it to further their personal agendas.

It can be easy to assume that we’re all born with an inherent knowledge of how to do all of these things. After all, we grow up watching film and television. With time, we grow to understand the tropes and techniques of those mediums even without a formal education on how they’re made. However, many people still struggle to critically understand the media in front of them. The theme, ideology, or purpose of a work is often obscured under the guise of pure entertainment.

While this is fair and true, being able to analyze the entertainment around you is ultimately a positive thing. To use a recent example, the campaigning by both mental health professionals and Netflix viewers to cut a graphic depiction of suicide in the teen drama 13 Reasons Why succeeded this summer. Netflix unceremoniously edited out the scene in response to these concerns, especially after a study was done by the National Institute of Mental Health in which it was estimated that teen suicides spiked 28.9 percent in the month after the release of the shows first season. The understanding that this scene could be enacting real damage persuaded the creators of the series to make a positive statement about responsible media making. Though it’s easy to write a teen drama off as entertainment, the images we see do affect us. If media makers are irresponsible, it can have serious consequences.

Likewise, the line between entertainment and news has blurred. Choosing which news outlets to read from can potentially mean opening yourself up to falsities or extreme bias. Knowing that CNN is a liberal network and that Fox News is a conservative network is of high importance in understanding not only how journalism works, but how American politics work. Media bleeds out into everyday understanding of concepts outside of itself: politics, gender, race, sexuality, social norms. The media we consume can shape our opinions on anything worth having an opinion about.

If you’re still having trouble believing me, refer to such popular movements such as the QAnon conspiracy or the anti-vax movement. Both were spread through the internet at rapid speed, hitting vulnerable people that don’t fact check their news and prefer to believe whatever their media of choice tells them is true. Even your conservative grandma is proof of media illiteracy: How many times has an older relative shared a dubious news post on Facebook, or a fake video about how abortion works? These posts target people with a base understanding of how and why information is spread online, literally weaponizing the media illiteracy of thousands of people.

And, yes, that means media can be dangerous. But instead of acting like the media is out to ruin the world and is the root of all evil, we have an opportunity to take matters into our own hands. This is where the concept of media literacy comes in.

If we consider history and the social sciences important, then there must be room for media literacy in those studies. From elementary school on, knowing how to use the internet and understanding how to navigate all forms of media should be drilled into our brains. A dedicated, required class for the subject is needed to help kids gain this important skill before they become confused adults that base their political ideologies off of Alex Jones conspiracies. As well as understanding how to use the internet, we should be introduced to a basic canon of important films and cultural touchstones. Analysing a film or a song can serve as a means to think about endless topics like relationships, race, sexuality, or ideology etc. in ways that are more palatable for the average student while also providing them with a background in the history of various mediums.

Should irresponsible media like The Alex Jones Show or 13 Reasons Why even exist in the first place? Probably not. But while they do, we may as well equip ourselves with the tools to think better of believing what they’re selling. And, hopefully, those media literate kids will grow up to create responsible media that is based in truth and prioritizes the well-being of their audiences. Though, to be sure, it doesn’t just have to be for kids. The ability to be curious and to further analyze the media you consume is available to us all. With time, we can all be media literate. We just need to learn how to value that future.

The Media Literacy Crash Course series on YouTube is a fun and educational resource to get yourself familiar with the fundamentals of this subject: https://www.youtube.com/playlist?list=PL8dPuuaLjXtM6jSpzb5gMNsx9kdmqBfmY 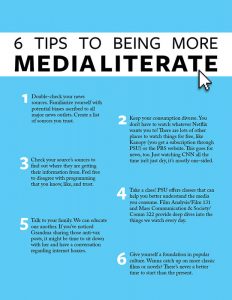 Written By
McKinzie Smith
More from McKinzie Smith
If Joe Biden gets the Democratic nomination, the DNC will have failed...
Read More