5th Avenue Cinema is the only student-run movie theater in Oregon and one of the few left in the country. Students started running the theater on October 1st, 1989, making this year it’s 30th anniversary. For many, 5th Avenue Cinema occupies a special place on Portland State’s urban campus. The unassuming, ground-level building from 1970 sits just off the corner of SW 5th Avenue, tucked behind several residential high-rises. Although a colorful mural of books takes up the wall along 5th Avenue, this building is for movies. The venue is welcoming but often seems idle. These days, it is a cinema on weekends but a lecture hall on weekdays. Passersby stop beneath its vintage marquee of slotted letters to catch a glimpse of the featured film titles before moving on. Today, the appeal of the cinema’s modest operation is in its eclectic film selections.

The infrastructure of the cinema has changed very little since it first opened in 1970 as a commercial theater, designed by Richard Campbell and William Yost, as part of the larger university campus construction project. In the center of the reception hall, there are two opposing couches and a table in the middle, making the room a cozy and intimate space. In fact, people can rent the cinema space for a fairly low rate. The cinema’s projectionist, Amelia Eichler, said that people have rented the space for birthday parties and have used the movie screen to play video games. The concession stand to the side sells refreshments and candy, but the popcorn is free with free admission for PSU students. The cinema has two screens. One screen is equipped with a digital projector to play films on Digital Cinema Package (DCP), the physical storage format that distributors now use to distribute digital films, which allows the theater to play more contemporary films in addition to the more classic movie formats shot on 35mm and 16mm film.

According to archivist Bryce Henry at the PSU Architecture, Engineering and Construction Archives (AECA), the cinema was built as a commercial space together with the Ondine residence hall, which was originally a for-profit co-ed student housing called The Viking. The commercial theater was never particularly profitable. There are few records about the past operations of the commercial cinema. However, there is one anecdote. In 1981, the cinema premiered the highly controversial documentary Ashram in Poona, which depicted the spiritual leader Rajneesh and his intentional community that once attracted mass following. The footage of the film opening in 5th Avenue Cinema was shown for a split second in the Netflix documentary Wild Wild Country. To attract students, the theater solicited programming suggestions from the PSU Film Committee, one of the oldest student organizations at PSU whose history goes hand in hand with the movie theater. Before the theater was run by students, “[t]he committee was showing movies on campus and the theater would ask for suggestions about what to play to attract students,” said current cinema coordinator, Makaveli Gresham, who has been part of the operation for three years, the longest out of any member on the team. In 1989, PSU bought the theater and it reopened as a student-run cinema. 5th Avenue Cinema is operated by the PSU Film Committee to this day. 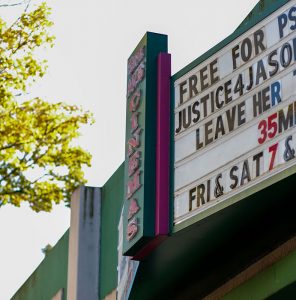 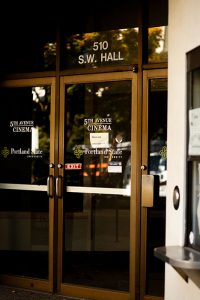 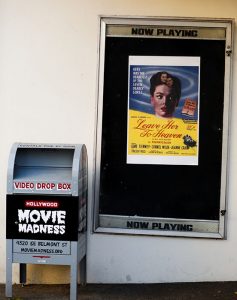 While the infrastructure has not changed much over the years, it seems as if the heydays of the theater have passed. On a Friday afternoon this October, the theater was empty. According to Gresham, back in the day, 5th Avenue Cinema was “a much bigger deal on campus.” It used to be open seven days a week, with students assisting 20 paid staff members. Gresham said that “somewhere between ‘95 and [the] 2000s, the cinema went into decline.” Since at least 2004, the operating staff has been much smaller. “Now, during the weekdays, the cinema serves as lecture halls for a myriad of classes such as psychology and film,” said Madi Alexander, 5th Avenue Cinema’s publicity coordinator.

Over the past three years, Gresham and his colleagues have faced challenges and adopted new directions for the cinema. The current management knows that the university is known for its non-traditional student enrollment and seeks to expand viewership and draw in the increasingly diverse student body of PSU. The cinema tries to reflect that in its operation and programming. “I think we have a strong students attendance base in the last three years,” Gresham explained. “We try to get more engagement, but it is difficult since lots of the students commute, and it is hard to get them come back downtown during the weekends.” So, they’re expanding into other film venues. For example, the PSU Film Committee was invited to take over film programming for the event series, Parkway North Project, which takes place in Smith Memorial Student Union. As Gresham put it, the expansion gives the film committee some flexibility: “[w]e are able to have programming outside of [the] theater and also in the theater, so students have more options to see good movies and we have another outlet to show different types of films.” At PSU, the student body is diverse and a significant part of the students have families with children. “We also try to engage with students with children more. So instead of showing movies at 7 now we start at 5 at Par, and we have films that are more family oriented like Iron Giant for this term.”

Because 5th Avenue Cinema is run by students, operations must stay adaptive as staffing fluctuates and new hires learn the ropes. As of now, three out of five students that work there are new members and they are still looking to hire another projectionist. The dynamic is a new experience for the most veteran worker, Gresham, who said there was little staff turnover over the past three years. Because students run the show, they can tinker with how it’s done accordingly. Gresham said that hiring new staff led to other changes. “We start to navigate differently,” he said. “Our programming approach has changed and is in flux right now.” But the operation functions with staff consensus. “We want to make sure everyone agrees with our organizational mission for programming and have more specific discussions on what types of film we want to show.” And ultimately, as a student group, everyone on the team is learning the trade. “We want everyone to build the skills that they should be building in this position, like programming, speaking to distributors and writing about films,” Gresham said.

While there are things that new staff need to catch up on, personnel changes also bring fresh perspectives to the table. Until recently, 5th Avenue Cinema featured 35mm and 16mm films exclusively. “It was the mission of [5th Avenue] cinema a while ago to stick [to] 35mm no matter what,” Gresham said, “but that is just not practical anymore.” Most of the new movies are no longer shot or distributed in 35mm film. The cinema acquired a digital projector system in 2018. “We need to show movies and have access to archival stuff and old movies that are in digital format,” said Gresham. Different hardware platforms allow the theater to feature movies from different times, which often spark interesting dialogues. Last winter, the cinema featured Get Out (2017) in DCP as well as lesser-known Portrait of Jason (1967) in 35mm. Each movie portrays the African-American experience from the perspective of a different decade.

The group is very deliberate when it comes to programming. The theater tends to feature many international films. This term, the film program’s range includes Mexican coming of age road film movie Y Tu Mamá Tabién to recent Chinese documentary about China’s one child policy One Child Nation, but it also serves as a community forum for PSU and the city at large. For example, after campus security officers shot and killed a young black veteran named Jason Washington outside a bar around the corner from 5th Avenue Cinema in June 2018, the community effort to disarm PSU gained momentum. The cinema staff met to discuss whether they should take a stance on the issue or not. They decided to use the marquee outfront to display “Disarm PSU” for the rest of the academic year, despite pushback from the administration. In March, 5th Avenue Cinema co-organized and hosted a three-day event in collaboration with PSU Student Union (PSUSU) called Disarm PSU: Grassroots Organizing, Building A Movement, which featured film media, lectures, and workshops about the history of community organizing in Portland. The marquee continues to reflect this student group’s support to disarm PSU. “We still have the Jason Washington memorial on the marquee,” Gresham said. “We all agree that it is important to show.”

Correction: In our original print article we spelled Richard Campbell’s last name Campell, we apologize for the error.