For twenty eight years, the southeast wing of Millar Library’s 4th floor has been home to Portland State’s collection of maps. The understated 3,700 square foot space has a dusty library air of yesteryear—scuffed linoleum floors, natural light from big windows, sturdy wood tables pushed together, surrounded by filing cabinets for maps of all kinds and all regions. The collection has road maps, atlases, raised-relief topographical maps, geological maps, aeronautical and nautical charts, local neighborhoods, foreign countries, even some celestial bodies. But last month, the maps were packed up to prepare for a renovation. The sleepy corner of the 4th floor will be transformed into a state-of-the-art collaborative learning center for graduate students tentatively called “The Collaboratory.”

The Collaboratory is a project between the Graduate School and the Library to foster interdisciplinary research and professional development for graduate students, Thomas Bielavitz, Library Dean and lead of the project, wrote in an email. “At its most basic, it will provide study space for graduate students, which is common at many university libraries.” But the Library also plans to use The Collaboratory to develop partnerships with organizations like the College of Liberal Arts and Sciences (CLAS) Collaborative, a group of students that organized because they do not feel that PSU provides enough support for interdisciplinary research, Bielavitz said. “We plan to work with them to provide space and other support for their activities.”

According to the project description from the PSU’s Campus Planning Office, The Collaboratory will be equipped with “the latest technologies for learning, research, and collaboration,” updated with sleek “interactive projection screens, smartboards, multi-touch coffee tables and ‘maker’ tools.” The proposed floor plan shows a wall partitioning off the entire southern portion of the 4th floor. One door leads to the reception and another door leads to open lounges along the curved windows that face the Copper Beech tree outside. Entrances will be controlled by a card access system, Bielavitz explained, but students and faculty that are invited or working on interdisciplinary projects will also have access. 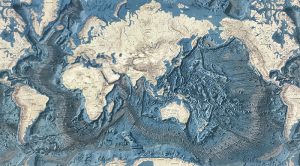 The renovation means a dramatic update for the olds maps section. Geometric carpeting will replace linoleum floors, a “reflective ceiling” instead of tiles and fluorescent lights, and frosted glass partitions with dry erase window film to replace filing cabinets and book stacks. There will be open and private spaces for group work, study pods, a semi-private lounge, and two “visualization labs.” The design plan points to some precedents such as the Visualization Laboratory at the University of Texas in Austin, which boasts technology like Stallion, the world’s highest resolution tiled wall and Lasso, a high resolution multi-touch screen.

PSU’s history dates back to Vanport, a prefab city by the Columbia River constructed during World War II to house shipyard workers. In 1948, a flood breached the poorly-constructed levees and Vanport was tragically wiped out. The city’s education facility, The Vanport Extension Center, was moved downtown and eventually became Portland State University. Although some maps predate the flood—like a 19th century map Rick Mikulski recently discovered and moved to Special Collections—none feature the Vanport stamp. Mikulski is PSU’s Government Documents Librarian. “It’s unlikely we hold maps that were originally from the Vanport library,” Mikulski explained. “Since that Vanport library was destroyed, the only materials known to have survived were the card catalog—saved by library staff—and a handful of books that were checked out.”

According to Head of Special Collections and University Archives, Chris Paschild, when the school moved to its current location in 1952, the Library was in Lincoln Hall, then called “Old Main,” along with other departments and services. In 1960, the Library got its first “dedicated location” in the College Center, now called Smith Memorial Student Union. In 1968, the collection and public services moved into the current library’s initial construction, known as Library West (the technical services in the College Center became “Library East” and weren’t moved to Millar Library until 2013). In 1975, Library West was renamed Millar Library on behalf of PSU’s 2nd President Branford Price Millar—whose tenure at PSU lasted from 1959–1968. In 1991, Millar Library underwent a second phase of construction to add the front addition with convex windows facing the Copper Beech tree—which was planted in 1892. Thus, a space to hold and behold maps was born.

In theory, the ample table tops and organized filing cabinets made for a very functional space for map studies. But it’s unclear who, if anyone, took advantage of it. “I have never used the library’s map collection,” Randy Morris, geography and GIS instructor at the College of Urban & Public Affairs said in an email, “not once during grad school many years ago, and not once during my time as a GIS Research Associate at PSU.” Yet, according to his staff biography, he “delights in introducing people to the field and tools of geography as well [as] sharing his love of cartography.” It’s not that Morris wouldn’t appreciate spending time with the maps collection. “I just don’t have any spare time,” he said. In his opinion, academic libraries have done an admirable job maintaining map collections, but the plan to stow more away is “unfortunately, a trend we are seeing throughout the…mapping world.” The professional mapper doesn’t seem to need them either. “[M]ost GIS and mapping folks I know rely on the accessibility and ease of digital collections, most of which can be accessed from their office chair,” Morris said. “Most cartographers understand the lasting power and impact print maps can have that is rarely replicated in the digital medium,” but at the same time, understand that libraries face a “dynamic reality,” and must adapt to the changing needs of the community. “If cartographers want a revitalization of the printed map, then it is incumbent upon us to chart the way.”

As the Library changes, students seem prepared to adapt, too. An anonymous survey conducted outside Millar Library found that only four out of 50 people said they favored the 4th floor for studies, mainly because it is a quiet floor with large tables. “It’s where I can focus on what I need to do,” said one undergrad. The plan for renovation didn’t bother her much. “Graduate students prefer a separate space and the 4th floor is a good option for that,” she said before adding, “the 5th floor is also good, but it gets too hot!”  Another student likes 4th floor for the French books, but no one mentioned the maps.

Whether people care or not, the Library is keeping the maps collection. Some maps were moved to the northwest corner of the basement and others were moved to an offsite storage facility that houses a third of the library’s entire physical collection. “We make daily runs out there to retrieve materials for students and faculty,” said Bielavitz.

According to Mikulski, the library started receiving maps in the 1960s. Some maps have been purchased by the Library over the years and a few are gifts from people, departments and other colleges. But the majority of the collection comes from the Federal Depository Library Program, a government program created to make government publications publically available for free. As a federal selective depository library, Millar Library must maintain a complete collection of current maps produced by the U.S. Geological Survey, the National Oceanic and Atmospheric Administration, and the National geospatial-Intelligence Agency. The Library also has incomplete collections from the U.S. Forest Service, the Bureau of Land Management and the C.I.A.

Funding for The Collaboratory is split between the Graduate School and the Library. Bielavitz said the Library is dipping into save funds it accrues from annual budgets. Recently, these funds helped renovate two Library classrooms, replace worn furniture on the 3rd floor and update study rooms with new paint, carpeting, and technology. It’s not clear when construction for The Collaboratory will begin since the timeline isn’t finalized yet. For now, anyone can visit the southeast wing of the 4th floor. The maps aren’t there but it still looks the way it did in 1991. At the end of the day, the community seems ready to welcome The Collaboratory to Millar Library. 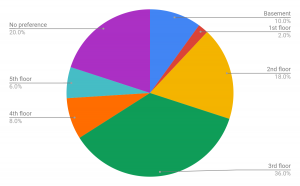 Written By
Margo Craig
More from Margo Craig
“We don’t have a good community if we’re not all transparent,” said...
Read More