Philip K. Dick is the author of 44 novels and several short stories. His work has been adapted numerous times for feature-length films and television series. Some of his most popular adaptations include “Blade Runner,” “Minority Report,” and “Total Recall.”  The sci-fi author has created a canon of alternate universes, confused identities, and human conflict with machines. 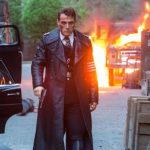 “The Man in the High Castle” stands out even in the current television renaissance we’re experiencing in the age of streaming. The character development, concept, and pacing of the Amazon series all combine to make an engaging show that is as binge-worthy as any other straight-to-streaming titles that have been released a season at a time.

Based on the Hugo-award-winning novel of the same title, “The Man in the High Castle” takes place in an alternate history, where the Allied forces lost WWII and the United States is divided by coast between Nazi Germany and the Japanese Empire, with a chaotic, lawless “neutral zone” dividing the continent. This backdrop provides one of the most recognizable elements to the new series, a richly detailed, grimly lit mise-en-scene that creates a 1960s New York City and San Francisco that’s structures are dilapidated when not Orwellian and covered in state propaganda such as swastikas or the rising sun. The visually arresting set design feels akin to “Blade Runner” (1982), another Dick adaptation directed by “Man in the High Castle” producer Ridley Scott.

The stunning mise-en-scene is matched by engaging characters that break tired archetypes. “High Castle” presents us with a myriad of uniquely motivated characters, which keeps the first season unpredictable and engaging. Frank Frink (Rupert Evans), for example, narrowly escaped Axis violence in the past. Rather than having a strong sense of resistance, he is motivated to maintain the status quo to protect both himself and his sister from further atrocities. Nazi leader John Smith (viciously played by Rufus Sewell, whose sadistic portrayal of villainy has only improved since playing opposite of Heath Ledger in “A Knight’s Tale”) similarly appears to be motivated solely by duty to the Reich, but begins to betray this surface level characterization for the love of his family. The show most impressively manages to evoke sympathy for characters that are otherwise purely antagonistic. When presented with their own antagonists we see enough of their human element to root for them to overcome characters that are arguably even more sadistic and ruthless.

In typical Philip K. Dick fashion, there is a constant questioning of identity and reality. The show’s central conflict is the discovery, and distribution of several 35mm film reels that depict WWII as an Allied victory. An organized American resistance is actively seeking these reels; meanwhile both the Nazi and Japanese governments are aggressively and ruthlessly pursuing the mysterious films, killing anyone who possesses them.

“The Man in the High Castle” is a captivating, gorgeous series that stands out among the already high standards of streaming era film. The gritty and amazingly detailed sets coupled with a solid cast that gives depth to well-written characters come together to create yet another Philip K. Dick adaptation destined to become a classic.