Who is to blame in our country?
Never can get to the one.
Dealing in multiplication,
And they still can’t feed everyone. Oh, no.
-Eddy Grant, “Electric Avenue”

During a recent trip to Salem, I drove by Salem Center mall. Tents, sleeping bags, shopping carts, tarps–a shanty town of synthetic fibers–occupied the block of Center Street between Liberty and High Street. About two weeks earlier, police had cleared a homeless camp in another part of downtown. Secluded private property near Wallace Marine Park, the site of illegal camping for decades, was likewise cleared in September. Even further back, in January of last year the city dismantled an encampment under the Marion Street Bridge and erected blockades to prevent reoccupation.

The ongoing saga of homelessness in Oregon’s capital is the same all over the country. People camp somewhere, the police clear the camp, the homeless population move somewhere else, and the cycle repeats. If the problem remains unsolved and the symptoms shift from one part of town to another, is “clear” the right word to use? How is it that we have come to accept it as normal to ignore, both as individuals and as a group, the large number of people living on the street?

In his book Bullshit Jobs, anthropologist David Graeber describes explaining homelessness in America to people in Madagascar, where he was conducting research. “They were flabbergasted to discover that in the wealthiest and most powerful country in the world, there were people sleeping on the streets. ‘But aren’t Americans ashamed?’ one friend asked me. ‘They’re so rich! Doesn’t it bother them to know everyone else in the world will see it as a national embarrassment?’” Graeber rightly points out that widespread homelessness would have been seen as a societal problem, not a moral failure on the part of the individual, by the focus group in Madagascar. In thinking about solutions, the core belief was that homelessness is a problem that affects society as a whole. This isn’t the case in the U.S. at the moment; the problem festers as we continue to view it as an individualized issue.

The general apathy seems to be the logical extension of the philosophy undergirding Margaret Thatcher’s assertion that “there is no such thing as society,” there are only wholly separate individuals whose grouping into cities and nations has no aggregate effect. This extreme form of individualism is now such a prevailing mode of thought that it tends to inform policy in our own country. To the extent that the state adheres to that principle, many of our most pressing problems have come about because of it. Homelessness, mass incarceration, drug use, environmental degradation: these have all reached a crisis point. If they are the individual’s problem, they then become nobody else’s problem. However, these problems grow and affect everyone, creating more problems.

The apathy toward one another is injurious not only to the downtrodden, but to those who avert their attention. Empathy and compassion, relations of reciprocity rather than transaction, benefit everyone. The major religions, whatever their other flaws, classify these traits as virtues; there is then a nearly universal belief, no matter how obstructed by a zero-sum market mentality, that helping our fellow human beings is central to being a good person. Consider, then, how negative the obverse traits are, how much apathy and callousness harm the exalted and humble alike. When we, as a society, debase the humanity of one group, we debase ourselves as well. Suffering cuts both ways.

Anger is worse than the apathy. Homelessness is often presented as a moral failure: some people are lazy and don’t want to work, and therefore deserve the worst outcome. This approach arises from a punitive mindset (people ought to suffer), perhaps part of our Calvinist cultural heritage. The argument against assistance programs is often presented in terms of cost. How exactly is cost computed? Is it not a major loss to a capitalist economy for a significant minority to devote their labor to surviving on the streets rather than to profitable enterprise? Does it save money to devote enforcement and cleaning resources to a problem that would be lessened by a more organized approach? Indeed, if our society valued labor the way it claims to, why does it devote so much energy toward palpating the collective wound instead of healing it? Surely some work-for-housing measures, rehabilitation facilities, and mental illness wards would more effectively use labor and capital than allowing a sickness in the social body to go on interminably. The societal refusal to adequately address homelessness only uses the rhetoric of cost to taxpayers to cloak anger toward the downtrodden. As with apathy, anger harms all involved. In the Ghatva Sutta, the Buddha taught that anger is like a plant with a honeyed tip with poison in its roots; holding on to anger intoxicates even as it harms. It arises from self-loathing, which manifests as loathing of others. Anger is a natural emotion, so there is no way to eliminate it entirely, but it ought not to be the sentiment that governs policy aimed at the most disenfranchised members of society. 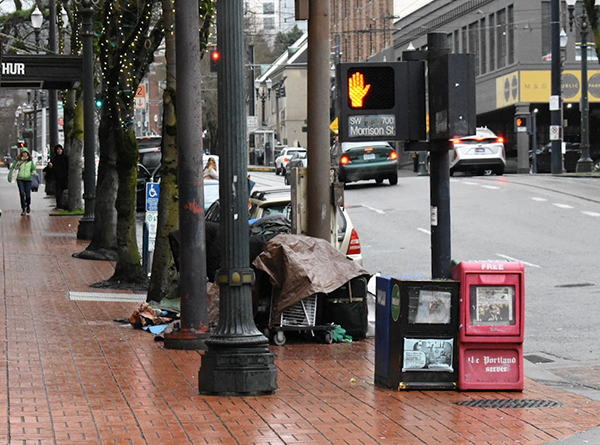 What is to be done?
Great change begins with small actions. Make eye contact with homeless people. If someone asks for money, give an answer; even to verbally or visually decline is better than to pretend that they are not people at all. No matter how impoverished or ragtag, every one of them at one time had a mother and father; even if they were unwanted from the time of conception, they were nonetheless at one time newborn babies who came into the world the same way everyone does. When asked for money, it may not always be your best option to give some, but consider carrying packaged food like granola bars or fruit bars to give someone who may need it.

The changes that must happen in our governmental bodies are not yet within my grasp, but the cumulative effect of policy over the last several decades seems to have been to streamline the funneling of capital and ownership of land upward while introducing so-called “improvements” that have calcified economic differences into an unacknowledged caste system. Only a concerted effort, over many years, at every level of governance can rectify this. In the meantime, the best sites of change are our minds and the best time to do so is now. Myriad personal changes, such as engaging less with phones and more with the people around us, will shift the cultural sense of empathy and from this effective policy can emerge.

Each person can contribute to a cultural shift. Pull your head out of your phone and look at the world, especially if you’re doing what seems like nothing: waiting in line, standing in an elevator, sitting at a red light, sitting in a waiting room. A shift in thinking will inevitably follow, and a shift in thought precipitates in turn a change in action.

It is for others and ourselves that we should change. Mercy benefits both the meek and the mighty.

Written By
Van Vanderwall
More from Van Vanderwall
There are two viral pandemics underway. The second of these to occur,...
Read More