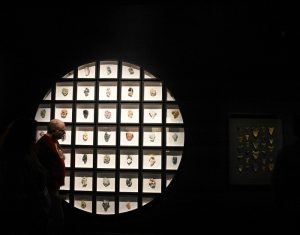 Exquisite Creatures is a fashionable, teaching moment that is possibly controversial. Butterflies, macaws and beetles are some of nature’s jewels put on display at the Oregon Museum of Science and Industry (OMSI). The aptly named exhibit by Oregon-based artist Christopher Marley, is no ordinary collection of specimens, but highly curated displays of dead animals. Visually delicious collections of “rare specimens,” of birds and bugs arranged in colorful and shiny mosaics will appeal to your innermost magpie. This exhibit wants to highlight “the connections between art, science and nature,” to let you behold how “awe-inspiring the natural world can be through the intricate design of its inhabitants.” Yet presenting dead animals in such a manner presents a question: can fashionably-curated science still teach?

Unlike most exhibits OMSI explains the background of Christopher Marley, the artist behind all these whimsical pieces, and how he came about the career that he’s in now. When Marley was young, he went to pursue a career in fashion while studying art and design but quickly grew an interest in the organisms around the world, or “artifacts of nature” as Marley likes to call them. One video at OMSI explained how no creatures were harmed in his process and only collects them when their time has passed. After he collects them, all the bugs, snakes, fish, and other creatures are preserved for his future pieces. 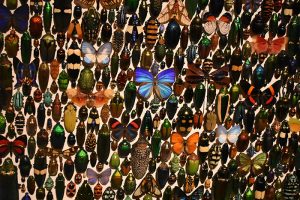 Marley talked with KOIN 6 News about traveling around for fashion-industry related work and being able to be around new environments. On those work trips he became very interested in collecting bugs from the many places he would travel to. Soon his new passion really came together. He explained how he gathers his “artifacts” from zoos, breeders, and collectors around the world. In talking with KOIN 6 as well as in OMSI’s opening video, Marley spoked about teaching indigenous people how to collect what he has looked for and how to sell to collectors. His goal is for people to be mesmerized by the Jade Dowdy found around the world and be able to appreciate what we have in the wildly different habitats around the world.

As I questioned a handful of people how they felt about the exhibit, many would be marveling over the what they were looking at. Many have never, and will never, see the pieces that are on display. Some pieces were unsettling to see for some, but the majority of attendees appeared amazed at what they were standing in front of. 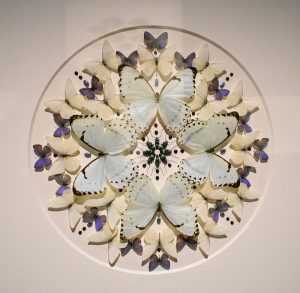 Lydia G. was at OMSI to see Exquisite Creatures was excited to be able to see an exhibit with so much to offer. She was one that didn’t find anything wrong with what was on display, and she was excited to expose her daughter to all the creatures shown. She was happy to learn right off the bat that everything was an organic process and that there’s no reason to think there’s something wrong with the art he’s portraying. She enjoyed being able to see animals she never thought she’d ever be able to see and thinks this is something that needs to be more normalized. Lydia stands by the idea that more exposure will make us appreciate our world.

From an outsider standpoint, who didn’t experience the exhibit in-person, Satika M. doesn’t see eye to eye with Lydia exactly. She agrees that these are beautiful pieces and that they’re interesting to have hanging up in your home, but she finds certain things unsettling. She is happy that there’s a natural process behind the animals getting preserved but there are certain pieces that make her feel uncomfortable. The idea to see certain animals just up in a in a box and not free is strange to her. She believes looking at pieces, like the insects, feels more normal, but others, like birds, can make others feel sad. However, she does see this as a way for us to get involved with our world.

Going to the exhibit is a toss up on how you feel about seeing certain things. The exhibit is definitely something to experience and see animals, minerals, insects, and plants that you may never see in your life.

Exquisite Creatures is on display until February 17, 2020 and entry to the exhibition is included with a general admission ticket to OMSI.