Killed it. [And the variants “crush it”, “slay” as an exhortation]

Why must success be equated with the taking of life? Is there something noble or commendable about killing living beings? These phrases of encouragement are meant to empower, but doing so by glorifying killing only serves to reinforce the idea that killing makes one great and that the more an action approximates killing, the more commendable it is.

Each variant in this phrasal family endorses a zero-sum mentality in which the elevation of one must mean the degradation of others. Reducing all interactions to zero-sum conflicts ignores the importance of cooperation and empathy. In the case of endeavors that literally involve killing—such as war or the industrialized slaughter of defenseless animals in abattoirs for subsequent processing and distribution to a bloodthirsty society (go vegan)—the figurative “killing” language contributes nothing to the project and causes cognitive dissonance.

Killing language in quotidian contexts gives rise to another variety of cognitive dissonance. Many forms of entertainment (television, news, video games, etc) traffic in violence as titillation, not as a subject worthy of artistic, religious, or scientific investigation. When the language, even the supposedly gentle encouragements (“You killed it on the exam” or “She killed that presentation yesterday”) invoke further violence even as we, as a society, seek to ignore the state-sanctioned violence of war and policing to the mechanized murder of animals to gratify the lusts of the tongue, we dissociate ourselves from reality. Killing is an act with extreme gravity and we should treat it as such. 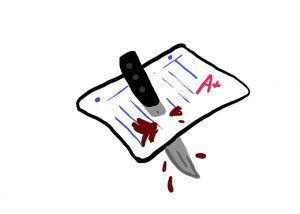 This verbal tic has somehow become commonplace in the last few years. Which is it—yeah or no? If the answer is more complex, why interject this at the beginning before providing the actual answer?

It’s true that this common phrase serves as a figurative clearing of the throat and is less troubling than other phrases addressed in this series. However, it reveals an apathy about effective communication. For some reason, it has become stylish to speak and write without precision, without concern for the denotations and connotations of words, without attention to aesthetic value. If you don’t care what you’re saying or how you’re saying it, then it must not be important, so why bother saying it?

“I’m cleaning my desk because it’s literally full of shit.”

You’ve heard statements such as these. Perhaps you’ve said them yourself. This use of “literally” is about as wrong as wrong gets. If you literally died laughing, how are you speaking now? If you literally filled your desk with shit, you have more problems than an unsanitary desk.

“Literally” means “literal, without figurative elements.” It does not mean “very” (“I literally laughed so hard,” which misconstrues the meaning of the word and places it in the wrong grammatical position) nor should it be used for emphasis (as in the previous examples or in a phrase such as “You two are literally the same person,” unless it’s spoken to a set of conjoined twins or someone with a personality disorder when it would be true). The misuse of  literally clouds the word’s actual meaning, which nullifies many kinds of humor (which hinge on the disparity between literal and figurative meanings).

Instead of abusing literally, expand the arsenal of adverbs. How about the occasional insufferably, cantankerously, ignominiously, or ebulliently, rather than the misappropriated literally, to liven up discourse?

Our society uses euphemisms to avoid the basic truths of existence, one of which is sex. “Sleeping together skirts the issue without even being very clear about it. Sex and sleep need not, and often do not, go together. Thus the phrase obscures what it supposedly makes palatable and safe to discuss.

“Did you literally or figuratively sleep together?” one might ask, attempting to clarify matters. Even this question causes confusion because people misunderstand the meaning of literally (see above). It’s better to be precise and polite (having sex) than to be polite and obscure (sleeping together).

On a related note, polite language accommodates a profusion of sexual detail if couched in euphemism. “Trying to conceive” (or trying to get pregnant), meaning “having lots of unprotected sex,” is, for some reason, acceptable despite offering more detail than its literal, and less revealing, counterpart. 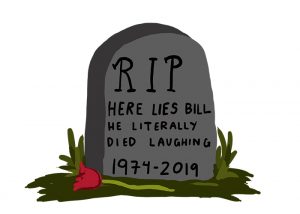 Passed on. [also “passed away” or simply “passed”]

“You could leave this life at any time. Let that determine what you think, say, and do.”

Our culture, to the detriment of all, refuses to look directly at suffering. Let’s begin by honestly confronting the fate that awaits us all: death.

Conventions of so-called polite conversation dictate saying “passed on” or “passed away” or even (if the preposition offends) simply “passed” to hide the most basic fact of existence, which is that every organism that lives eventually dies. Despite the much ballyhooed investments by [insert names of people who are investing in immortality technology], which in a more sane society would be rightly decried as a fool’s errand funded by people with more money than sense, to avert death, it is a fact. Death is not a matter of choice. It therefore behooves us, in the midst of a society so dishonest as to delude itself about the most basic facts of existence, to remain in touch with truth. We can do this by practicing right speech—that is, speaking and writing the truth and not creating euphemisms to provide false consolation.

A dog, a cat, a person, or any other living being does not pass on. They may pass gas if they are particularly flatulent beings. They may pass the exit if they are driving too fast (this had better be people and not animals, per the relevant motor vehicle laws). They may pass the spinach and tempeh salad at the dinner table (go vegan). When their hearts’ beats cease, neurons go dark, and eyelids shut the final time, they do not “pass on”—they die. When, in language, the apparatus by which rational thought is conducted, we hide from death, we also hide from life. Be present in life by acknowledging death; it can end at any time.

Consider some thoughts from Stephen Jenkinson: “The crucible for making human beings is death. It’s not success. It’s not marriage. It’s not growth. It’s death. It’s the fact that it ends.

If you can’t anticipate your death and befriend it and so on, how in your life are you? Until your ability to see the flower is rooted in the fact that the flower won’t always be there and neither will you, how well do you really see the flower?”*

Yongey Mingyur Rinpoche: “Learning about death and dying is good for living. It’s also good for dying—to grow, to learn until the very last breath.”**

Written By
Van Vanderwall
More from Van Vanderwall
Julie Perini is a tenured professor in the art department focusing on...
Read More