Santa Claus, reindeers, candy canes, red and white, and snow! These elements come to mind immediately upon the mention of Christmas. Santa imagery dominates the aesthetics of the holiday. Most people in the world know who Santa Claus is; he’s a global icon. People might not know the origins of his story, or how he became a part of Christmas, but everybody can immediately assign and align the red suit, big hat, and white beard with Santa Claus.

It’s sad to see Santa receive all this fame and popularity while his colleague, Krampus, is nowhere to be seen. In America, Krampus won’t be seen at Walmart, on mantles, or even greeting cards. Why isn’t Krampus part of our Christmas celebrations? He might not be as appealing or as charming as Santa, but that doesn’t mean he should be absent from the spotlight. Just because he’s a half-goat, half-demon doesn’t mean he should be exempt from Christmas. Personally, I would like to see a Hallmark card featuring Krampus.

Like his bearded human counterpart, the story of Krampus originates from Eastern Europe. The legend of Krampus was created as a counterpart to the kindly Saint Nicholas. The Christmas demon, with a deranged face, bloody eyes, giant horns, and a furry black body, actually dates back to pre-Germanic paganism. Historians cannot exactly pinpoint the origin of Krampus folklore, but, presumably, the tales predate Chrisitianity. According to Ancient Origins, like Saint Nicholas, the portrayal of Krampus has evolved with time. Krampus’s representation of the balance between good and evil has survived time and culture. The name Krampus originates from the German word Krampen, an old term meaning pickaxe. The Catholic Church in the 12th century wanted to ban his inclusion in holiday celebrations, followed by another attempt by Austria’s conservative Christian Social Party in 1934. None of these were successful. Krampus still reigns in Europe today, more or less for the enjoyment of drunken men dressed as devils. Together, they take part in something called the Krampus Run—an event popular in countries like Austria, Germany, Hungary, Slovenia, and the Czech Republic. Traditionally, the run involves participants attempting to escape the individual(s) dressed as Krampus. Being drunk appears to have been a necessity insofar as it provided motive for Krampus to catch them. The drunkenness is still a big part of the event today. Always taking place at night, the Krampusses are dressed in terrifying costumes, wearing demonic masks with spiraling horns. Runners are usually local college students and, of course, tourists!

Krampus has different backstories depending on what country one looks at, but no matter where you look, his treatment of bad children has been far more extreme than the man in the big red suit. Instead of giving children coal, Krampus would whip the bad children and collect them in a sack. He would then take them away to his lair. Some legends suggest that Krampus would eat these children, while others suggest that he would kidnap and keep them in his lair for a year until they were disciplined and ready for release. Very old tales, especially from the Eastern European regions, tend to describe Santa and Krampus working in partnership. Santa would reward the well-behaved children with gifts, and would send Krampus to the “wicked” ones. This is the lore behind Krampusnacht (Krampus Night). Krampusnacht takes place twenty days before Christmas. Typically, men dressed in demon costumes chase around children in an alcohol-fueled frenzy. It’s not exactly aligned with our version of Christmas in America. However, it is an interesting way to encourage kids to behave for their parents around the holiday season.

I propose the reintroduction of Krampus as a Christmas icon in America. Perhaps not using the demonic iconography derived from the depths of Hell, but from a more Hallmark-friendly point of view. To make this happen, Krampus could work together with Santa Claus and maybe have a chat on how naughty children should be punished on Christmas. Giving them coal doesn’t seem to be working, but kidnapping children, holding them for a year, and whipping them might not be the ideal either.

I hope both Krampus and Santa come to an understanding on how to coexist in the Christmas landscape. There is more than enough room in Santa’s sleigh for Krampus to fit in. If that doesn’t work, I’m sure the elves can make another sleigh that accommodates both of them. After all, it’s Christmas! As we head into the holidays, let us not only leave milk and cookies for Santa, but some schnapps for Krampus, too. 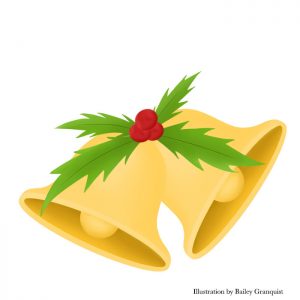