Imagine wandering through central Oregon 100 million years ago. You look to the West, expecting to see more land, but suddenly realize you are standing at the edge of the continent. Redwoods riddle the coastline, and the wind scatters their needles out to sea. As you walk down to the rocky beach, you imagine the kinds of creatures you might find in the ocean—beautiful spiral-shaped ammonites, snails, fish, and mollusks. Unfamiliar reptiles and dinosaurs roam around.

Such was the landscape for the Mitchell ornithopod, the first confirmed non-avian dinosaur found in Oregon. (Technically, the term “dinosaur” refers to extinct terrestrial reptiles, and does not include marine life.) Its fossilized toe bone, specifically the third phalanx of the central digit of the right hindlimb foot, was discovered in Mitchell, Oregon in 2015. Dr. Gregory Retallack (pronounced like “metallic”), a researcher with the University of Oregon, stumbled upon the toe bone while with his students on an annual field trip to the Hudspeth Shale, a mid-Cretaceous rock formation in Oregon that showcases geologic history between 65 and 145 million years old. No excavation was required—Retallack simply found the toe bone resting on the ground and immediately knew it was different from the various marine fossils scattered nearby.

Scientists believe that most of Oregon was underwater during the Cretaceous period, so marine fossils are common in the Hudspeth Shale formation. The Mitchell ornithopod discovery suggests that dinosaurs lived here, too. Given the toe fossil’s proximity to a horde of marine fossils, Retallack believes the dinosaur got there via the “bloat and float” theory, which proposes the animal died on shore, filled with gas from decomposition, got picked up by the tide and floated out to deeper waters. According to Retallack, “bones can be preserved almost anywhere, unless it’s an acidic environment.”  Due to distinct features found within the shale, Retallack and his team reasoned that the fossil was formed about 300–500 feet deep.

To narrow down the identity of the dinosaur, Retallack’s team compared the bone to six Cretaceous ornithopods from complete skeletons, and found that it resembles two different dinosaurs found within the same geologic layer and time period: an early Cretaceous ornithopod fossil of California and a late Cretaceous theropod of Washington. Retallack visited museums all over the country to study ornithopod feet. He calls it the “summer of the foot fetish.”

Retallack and his team knew the bone was generally weight bearing, and likely part of the hindlimb of a bipedal organism. The absence of collateral pits on either side of the bone are a characteristic of most dinosaurs. The size narrowed it down to a Hadrosaur or an Iguanodont. They found that it resembled the bones of “Leonardo,” a late Cretaceous hadrosaur discovered in Montana nearly two decades ago. They inferred from Leonardo that the Mitchell ornithopod was 17 feet long and weighed 1,500 pounds. Retallack thinks it is likely a new species of dinosaur, but needs more bones to name it. “It’s kind of foolish to name a new species on a toe bone,” as Retallack put it. “Until we find a skull or a tooth of this Mitchell ornithopod, we won’t have a clear idea of what it is.”

Although the toe bone, of the Mitchell ornithopod is the first confirmed dinosaur bone found in Oregon, it is not the first dinosaur bone found in Oregon. The Mitchell ornithopod find was published in a peer-reviewed journal, The Journal of Vertebrate Paleontology, merely weeks before another article describing a duck-billed dinosaur sacrum was published. This dinosaur died about 20 million years before the Mitchell ornithopod. In the 1960’s, the U.S. Geological Survey discovered the sacrum fossil at Cape Sebastian. Former UO researcher, Dave Taylor, led a crew to excavate in 1994, and only recently got around to preparing the fossil for the peer-review process.

For the first time, we’re learning how dinosaurs are part of Oregon’s history. Thanks to dedicated paleontologists, we can imagine what life was like millions of years before humans evolved. The Mitchell ornithopod is currently on display at the Museum of Natural and Cultural History in Eugene, Oregon. Taylor intends to exhibit the hadrosaur sacrum in Portland later this year. 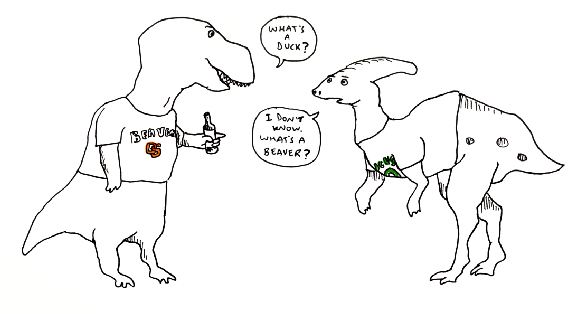 Ornithopod: A dinosaur in the suborder Ornithopoda, all of which eat only plants and most of which are bipedal.

Dinosaur: Ancient terrestrial reptiles, does not refer to marine-dwelling creatures.

Hudspeth Shale: A geologic formation in Oregon portraying the Mesozoic era, which includes the Cretaceous period.

Written By
Amy Seufert
More from Amy Seufert
Oregon is dangerously close to a measles outbreak. Coupled with the anti-vaccine...
Read More