As a student, I have spent day after day trying to pave my path in the world, trying to discern my deep passions from my short term obsessions, and trying to enjoy every moment. For me, I have found that it is easiest to figure all of this out if I am experiencing different things and deciding what I like. About a year and a half ago, I started asking for what I wanted, because the worst that can happen is I get told “no.” So I began applying for everything I could possibly apply for that even slightly intrigued me. This is how I found myself aboard a research boat for a week in October in the Bering Sea.

A year ago, I applied for a program called STEMSEAS (science, technology, engineering, and math student experiences aboard ships), which takes undergrad students on transits aboard research vessels (R/Vs) for about a week in order to give the students first hand experience about what it would be like to do real ocean research. I had completely forgotten I applied for the program until I got an email in August 2018 that STEMSEAS wanted to interview me for the October expedition aboard the R/V Sikuliaq on a transit from Nome, Alaska to Seward, Alaska through the Bering Sea, the Aleutian Islands, and the North Pacific near Kodiak Island. I did the interview, got my acceptance letter, and then began planning to go.

As quickly as the acceptance process happened, the leaving process seemed faster. I hopped on a plane in Portland and eventually landed in Nome, Alaska. Nome has to be one of the smallest airports; it was one room that included check-in, security, baggage claim, and passenger pickup. It was in this airport that I saw my chief scientist standing with a sign reading, “Sikuliaq- Welcome STEMSEAS! Tips welcome.” Within five minutes, the other students and I were being shuffled outside and into a van. We took a five-minute drive through downtown Nome and out to the Harbor where I got to finally see the Sikuliaq. It is a fairly new research vessel owned and operated by the University of Alaska. As I was standing there, the size of this ship blew me away; it was large in size, both long and tall. This was the first moment that the nerves left me and I was excited, but slightly fearful. 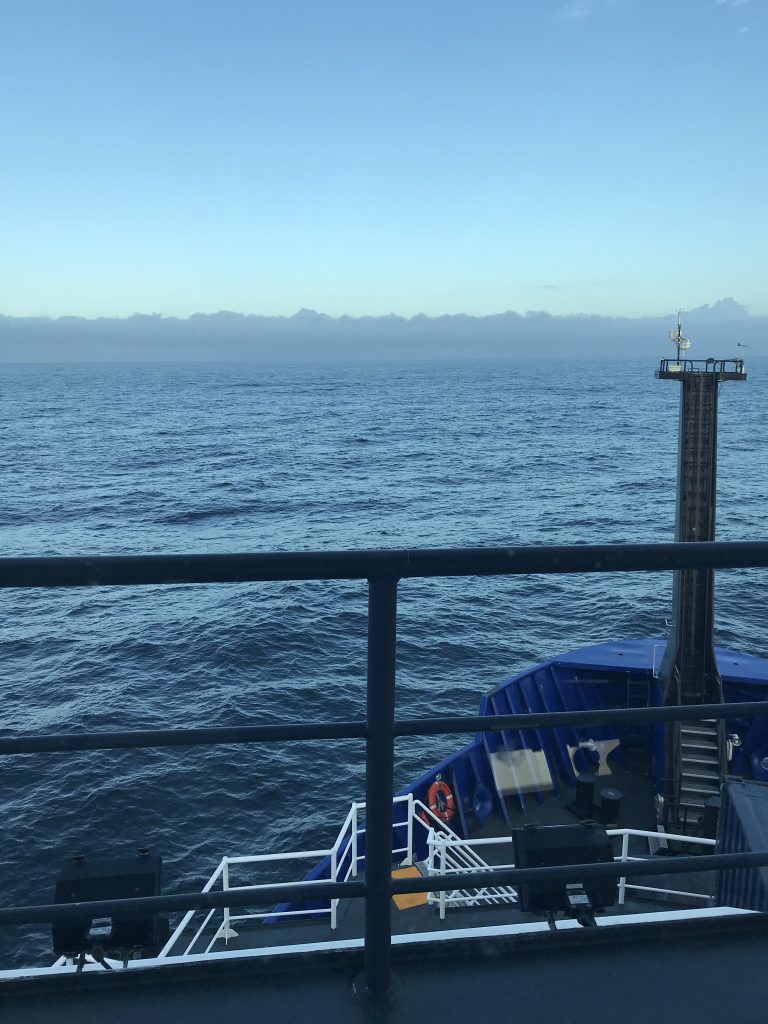 Jesse Trott traveled from Nome, Alaska, through the Bering Sea collecting and analyzing data aboard the R/V Sikuliaq. photo by Jesse Trott.

The other students and I were quickly rushed onto the ship and shown to our staterooms where we were told to make our beds while we were still docked. The seas were going to be rough as soon as we left the harbor because of two storm systems moving in. Life on a boat quickly began with dinner in the galley followed by a safety briefing that was rough because at this point we had left the harbor and were headed into the Bering Sea. Over the course of the next few days the seas were angry; at moments it felt like the boat was going to tip over. Personally, I was so seasick I was unable to leave my stateroom (well, actually unable to get out of bed) without being incredibly sick.

Thankfully, on the fourth morning aboard the ship, I could tell that the seas had calmed, and the storm had passed. I finally made it out of bed and to breakfast, which I could barely eat any of after being on a diet of water and crackers for three whole days. After breakfast, we were down in the lab examining sediment that had been collected two days ago on the continental shelf in the Bering Sea. We were discerning what it was mostly made of when the phone rang in the lab. It was the captain calling to tell us to come up to the bridge because there was a pod of fin whales really close. We scurried up the stairs and into the bridge as fast as possible. When we reached the top, and, for the first time, I looked out at the blue ocean with land nowhere in sight; I cried. This was a dream of mine for as long as I can remember and it finally came true. The next three days were full of whale sighting after whale sighting, porpoises, jellyfish, all of the seabirds imaginable, magnificent islands, blue skies, and the sun shining bright—all in the midst of analyzing the data that was taken during the storm. We studied the stability of water columns, the DNA analysis of seawater, and sea floor sediment composition.

In order to do most of the science we used a device called a CDT, which stands for conductivity, depth, and temperature. As the CDT gets dropped deeper into the water it is sending data into the computers aboard the ship for scientists to be able to analyze. We used this data by creating various graphs and tables with MATLAB. These graphs and tables helped us to determine the stability of the water columns in the Bering Sea. Not to our surprise, the water columns were very unstable; this was likely due to the major storms that were passing through. The CDT also collects water samples on the way down from all different depths. These samples were used to do a DNA analysis of the seawater using a different device called the Nanopore MinION; which was used for the first time on a research vessel during this transit. This DNA analysis showed changes to microbial communities because of the storms.

For the geologic composition of the sea floor, we used what was basically a giant metal claw to take samples from three different locations along the continental shelf. If the seas would have been calm, we would have been able to take core samples and look slightly past the surface sediment and get more in-depth information. After the sediment was collected, we used different sizes of strainers in order to separate the sediment by size; then used microscopes to sort the sediment into the different types as best as possible. Although separating sediment by one grain at a time is incredibly difficult on a constantly moving ship.

Even though the science we did on the ship was minimal, it was incredibly interesting and insightful. Our days were full from dawn to dusk with all of the science and wildlife—while also sneaking in conversations with the crew of the Sikuliaq to learn all about life at sea, from the top to the bottom of the boat. The crew had us participate in “watches,” both in the bridge and in the engineering room; through these watches we basically learned, in detail, how the ship operates and the duties of the crew members. Although I personally spent more time in the bridge than I was required to, but the view was impeccable.

And long before I was ready for the transit to end, the dock in Seward came into sight. As I sat there looking out the porthole, I found myself incredibly grateful for my time spent at sea, all of the people that I came into contact with, and the discovery of a new passion. Since leaving Alaska and the Sikuliaq, I have dreamt of returning and am searching for my next opportunity to join a crew of scientists and sailors aboard a vessel to sail the seas.

Written By
Jesse Trott
More from Jesse Trott
Imagine living in a world without technology or a grocery store, and...
Read More