There are two viral pandemics underway. The second of these to occur, and the more literal, is that of the coronavirus. At the time of writing, more Americans have died from this virus than during the nearly two decades of armed conflict in Vietnam. Many reliable news organizations (and some unreliable ones that need not be named) are providing better coverage of the coronavirus than I can hope to do. It is the second of these viruses, the figurative one, that concerns this article.

I refer to the virus of nihilism. American society at all levels is beset by a sense of meaninglessness and futility; this pandemic has been building for some time and the coronavirus outbreak has only brought it into clearer focus. Let us begin by considering the recent protests in Michigan and elsewhere to “open up” or “liberate” these states. Although protestors interviewed aver that they are not what this country calls conservatives, the verbal and visual codes say otherwise. Note how terms like “liberate” and performance art stunts like coordinated traffic jams and layered theatrical irony, which were once the province of the radical left in the 1960s and 1970s (Abbie Hoffmann and Jerry Rubin are the unlikely forefathers of Joey Gibson, Joe Biggs, and their ilk), have been appropriated by the far right. Now consider what these protestors, when interviewed, have to say about their role in spreading the disease: to summarize for clarity and grammar, their argument is that the pandemic is a problem which requires serious attention, but that their rallies will have no appreciable effect on hastening the spread of the coronavirus. The words belie the actions: beneath the hollow, ideologically impoverished exhibitionism, their claim is that their existence does not affect other people and that their actions have no repercussions. Ponder that for a moment. Large numbers of people rally, bandying about catchphrases and buzzwords that disguise their true aim, which is to fight the feeling of futility that pervades life.

This is not to say that such rallies are good, because they are not. (If you are under the impression that coronavirus is no big deal and that the only person affected by your decisions is yourself, I implore you to read up on epidemiology, human biology, virology, the history of infectious disease, and many other relevant topics. You should also ask yourself why these protests were not broken up by police in riot gear, as similar protests by people who are not white have been.) The point is that by asserting their absence from the causal relations that govern the universe, these protestors are using the readily available means of far-right grievance to express their existential malaise. (I hesitate to invoke the comparison, now sadly trite, of far-right movements in the past, and yet the German and Italian fascists operated with a similar enraged grievance thinly cloaked by false bravado and machismo.) Because people feel on an unconscious level that they have no effect on the world, they behave as nihilists (whatever their stated affiliations) and act accordingly in order to find evidence that they do exist and they do matter. 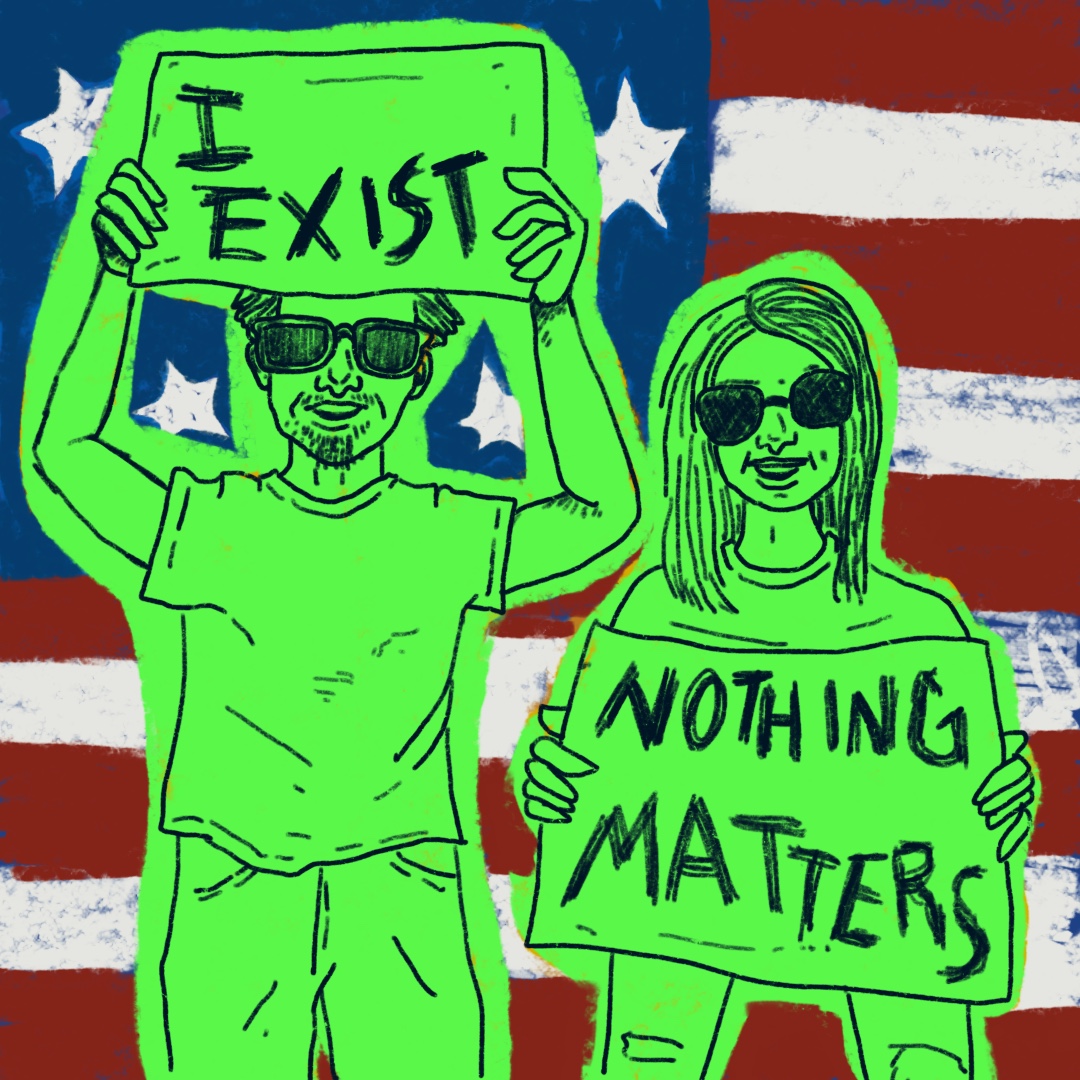 In a spiritual sense, each living being matters (and to be locked out of this awareness is to be in Hell, the realm of damnation); in the more immediate, more apparent, legal, political, and economic senses, they do not matter. Very few people in this country matter as legal/political/economic entities and every apparatus of the state has been directed to this end for a long time: real (measured relative to the cost of living) and absolute (measured numerically) have declined continuously for decades; the health-care system has the world’s fanciest gear, but hardly anyone has a means of receiving said fancy treatments, let alone the less elaborate treatments they need; most forms of labor have been utterly stripped of meaning; the financial structure acts as a siphon to funnel capital up and debt down (which so-called “trickle down” economics hardly disguises as pissing on the poor); and to claim that people should be paid enough to live at a subsistence level without accruing debt is considered an extremist position. This is a deplorable state of affairs, but it is at present the truth, and it is the animating principle beneath the social upheavals with which we have been beset for the last few years. Indeed, the factions that have violently confronted each other numerous times in Portland and other American cities are, with this understanding of nihilistic malaise, actually in agreement about futility.

This infection by the virus of nihilism will fester longer than the coronavirus pandemic if left unaddressed. Outbursts will become more theatrical, more dangerous, and more divorced from identifiable principles. Myriad changes in law, from international trade agreements on down to city ordinances, must be revised to allow people to live and work in meaningful ways and not to be chattel in all but name.

One immediate change each person reading this piece can make is to examine the principles underlying preferences. Look into the rhetoric of the groups to which one professes allegiance, and opposing ones, to understand what are the axiomatic beliefs on which the rest of the ideology is erected. For example, these groups asking to “reopen the economy” and to be “liberated” (per Twitter instructions from the vile one) are bandying about catchphrases that have emotional resonance but no meaning. Liberate—as in liberate them from strictures that attenuate the transmission of a disease, so that they can die? Would this “liberation” resemble the response to the bubonic plague by medieval European governments, whose subjects were quite free to die? Follow the investigation further and ask how it is that “the economy,” which doesn’t necessarily promise remunerative and meaningful work to those storming capitol buildings with guns, is more important than people, including those who seem to see their lives as so futile and unreal that they would demand a “reopened economy” instead of their own flourishing.

Study causality—and I mean this in earnest. In primary school there are rudimentary lessons on the distinctions between fact and opinion, cause and effect, but one ought not discard these lessons upon maturity. To paraphrase the Buddha, Dogen, and others, to investigate causation is to investigate the nature of existence; coronavirus, violent rallies, punitive moral and legal strictures, and abstractions like “the economy” are all facets of existence and when one understands how one fits into this web and what one’s beliefs are, the way will become plain.

This time is an opportunity for a great collective awakening, if the lessons presented to us are heeded. If those lessons are ignored, we can expect this existential malaise to continue to fester until a worse disruption than this one (which could be an even more virulent contagious disease) causes a cataclysm. Never give in to the coronavirus and never give in to the virus of nihilism.