Upon first entering the Whitsell Auditorium, the theater under the Portland Art Museum, I couldn’t figure out where to sit. Normally when I go see movies, I sit as far back as the natural progression of the theater will let me — not quite next to the exit, but with my back against the wall of the projection room. In larger theaters whose seats ascend at a more radical rate, I like to sit at the very top, as if the stairs I climbed to get there were some sort of hiking feat, and the view at the top something more beautiful than just spying on my fellow movie-goers. But, in the small space of the Whitsell, I found myself wandering further and further towards the front, until I was about four rows back. 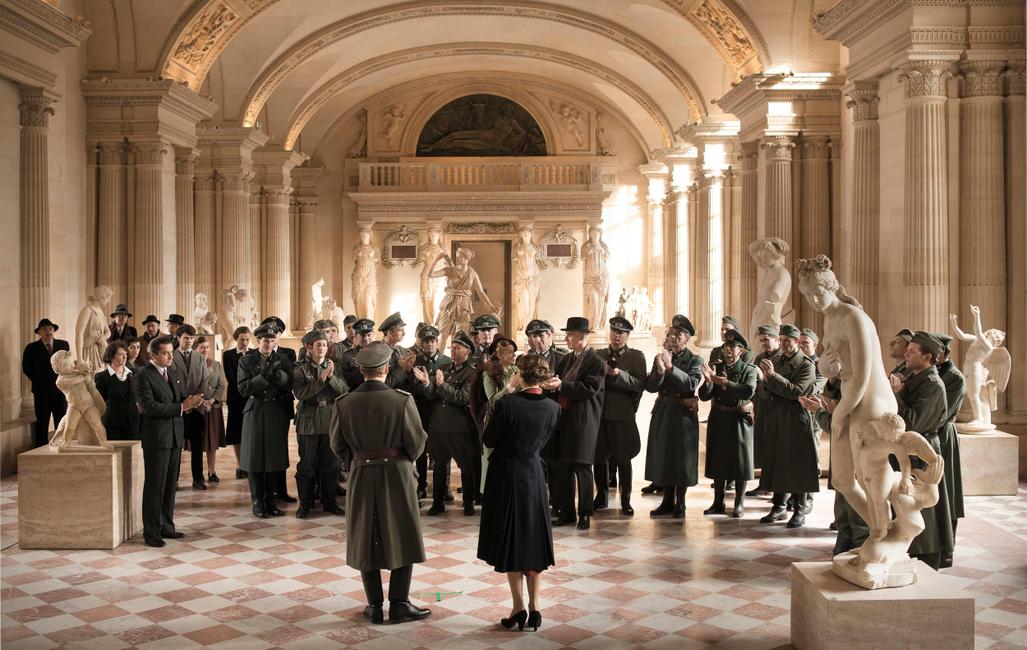 Before “Francofonia” started, I looked around and realized I was the youngest attendee by at least twenty five or thirty years. I was suddenly glad I had worn lipstick, as if actually looking in my twenties instead of the often-estimated mid-teens would help me blend in more. Maybe there was something about a movie whose plot was described in the festival flyer as “…the story of Jacques Jaujard…who conspired to protect and preserve the art treasures of the Louvre Museum from the cataclysm about to visit Europe in 1940, and ask what art tells us about ourselves in the faces of one of the most devastating conflicts the world has ever known” that appeals to Portland’s prestigious citizens.

The movie opens with a vertical split-screen, with one side rolling credits over a white background, while the other is mostly black with small, white subtitles on the bottom. This goes on for longer than expected, and then we move to a man in a messy home office, narrating in Russian as he tries to videochat another character, the only english spoken throughout the entire film. It’s presumable that the Russian is Alexander Sokurov, or somehow representative of him, as they share the same name. We return to these two sporadically throughout the film, but Sokurov’s voice remains the primary narrator.

From there, the movie turns into a strange mish-mash of vintage film reels that seem to have nothing to do with art or the Louvre, except that they were in approximately the same era; combined with strange fake reenactments with a sepia/aged filter applied over them to help them “blend”. The entire illusion is broken, however, by modern passersby and modern cars. I can understand that it would be hard for an indie filmmaker to get a Parisian street to clear out enough to get the shot, but then again, he did it with the Louvre.

The entire film had a strange obsession with repetitious phrases. Occasionally (though entirely too much), the narrator would simply repeat “The Louvre, The Louvre” before launching into his sentence. The trend continues with two characters: Marianne, a young woman who viewers might recognize from the painting Liberty Leading the People (Eugène Delacroix), and whose only line or duty seems to be repeating the phrase Liberté, égalité, fraternité, and Napoleon, who stands in front of assorted paintings and says, “C’est Moi!” (That’s me!). Actually, Napoleon’s narcissistic quip seems to be the only humorous part of the movie, but his and Marianne’s appearances still make little sense, other than metaphysical art value. In the ultimate “meta” moments of the movie, the narrator would directly interrupt the characters and, at one point, talk directly to them in order to sum up the rest of their lives. It was jarring, and made the story complicated to follow or even identify.

When the lights came up, I found myself again looking around the theater, wondering if I had missed something. Was I just young and stupid, not able to understand a film of such high artistic value? Did I just not care about The Louvre enough? Did I need historical background, or a degree in art history, or perhaps just another decade to my life? As we all shuffled towards the exits in order to go about the rest of our day, I determined maybe that wasn’t any of these things. Maybe the movie just wasn’t that entertaining.

“Francofonia” played at the Whitsell Auditorium on Feb. 15, 2016 and the Moreland Theater on Feb. 17, 2016 during the Portland International Film Festival. It was directed and written by Aleksandr Sokurov and stars Louis-Do de Lencquesaing, Benjamin Utzerath, Vincent Nemeth, and Johanna Korthals Altes. “Francofonia” is not rated.

Written By
Kasey Colton
More from Kasey Colton
The holidays can be a stressful time for all of us. Between...
Read More