MMORPGs, or Massively Multiplayer Online Role-Playing Games, have always occupied a unique space within the history of video games. From “Ultima Online” to “World of Warcraft,” these online outings present gamers with the unique opportunity of participating within arguably the most accurate virtual simulacrum of the social experience that gaming has to offer.

Nick Yee, a writer who hosted the Daedalus Project — a long-running survey of MMORPG players between 1999 and 2004 — aimed to tackle some of the complex and nuanced ways in which MMORPGs differed on a fundamental level from other video games.

“Popular media caricatures video games as relentless and senseless violence, so it becomes easy for non-gamers and even academics to dismiss video games as not only pointless but perhaps even dangerous to society,” Yee writes. “MMORPGs, on the other hand, are surprisingly non-violent and offer many examples of complex play that involve social interaction, collaboration and long-term goals.” 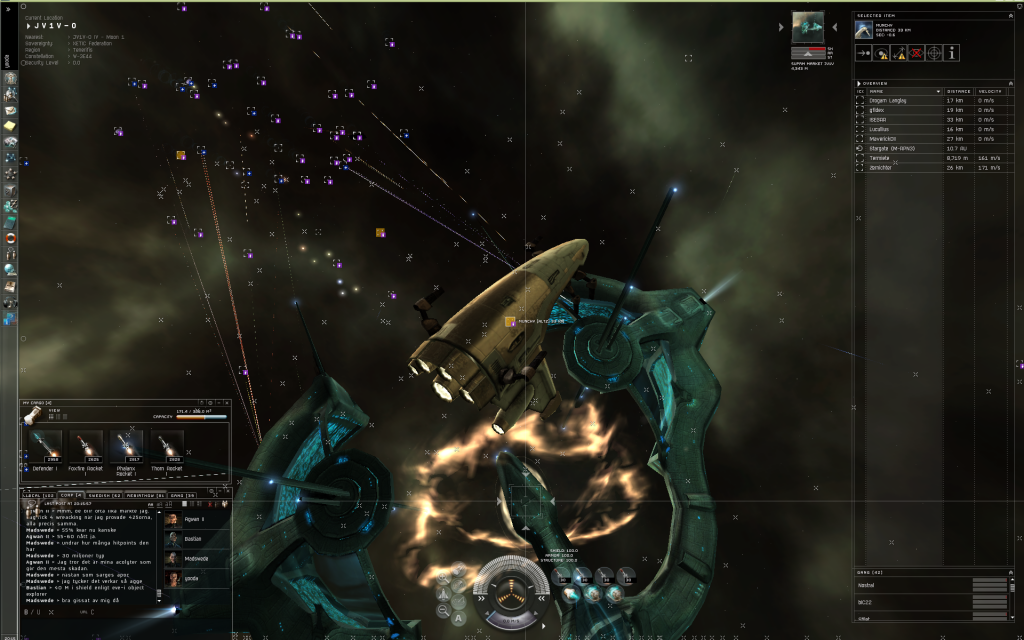 The overarching framework of social interaction and collaboration that provides the backbone for the majority of MMORPGs is something that even gamers with very little experience within the genre can attest to, even if only through observation.

“‘Play also takes on new meaning in a world where groups of strangers assemble to achieve a common goal,” Yee writes. “The drama and intrigue that emerge from these chance encounters and from sustained groups, such as guilds, become the crux of the MMORPG experience, more so in fact than the pre-designed game elements.”

Perhaps more so than any other MMO, “EVE Online”, developer CCP’s popular spacetime MMO, thrives on these player-defined elements.

“It contains all the set pieces of space opera—moons, distant outposts, mighty dreadnoughts—but it is no ordinary video game,” writes Robinson Meyer for The Atlantic. “In fact, it is like little else on the Internet in its ability to mirror the functioning complexity of the real world.”

Take, for instance, the story of Sean Smith. An IT worker for the U.S State Department who, on September 11, 2012, lost his life in an attack on the U.S embassy in Benghazi, Libya, Smith was renowned as one of EVE Online’s most cunning diplomats. Under his avatar’s alias, “Vile Rat,” Smith relied solely on his wit and intellect, not force, to advance; he employed persuasion, complex schemes, political coups, and even went as far as to fake an act of ‘treason’ to infiltrate an enemy faction for months on end.

And while Smith’s real-world ambitions may not have extended into the realm of diplomacy, the same could not be said for Vile Rat, who started up his own wing dedicated to diplomacy — the Corps Diplomatique — within his faction of GoonSwarm.

“He’d give them hypothetical situations and require them to write essays about how to solve crises. He built a corps of 10 diplomats, all of whom would meet with friends and rivals to build relationships,” writes Stephen Totilo of Kotaku. “In other words, the real-life State Department employee started a State Department in [“EVE”].”

Certainly, there is the undeniable element of fantasy and escapism at play here — “EVE Online”, after all, is a deeply-realized sci-fi universe filled with thousands and thousands of players vying for dominion. But the parallels between Smith’s online persona, however exaggerated, and the ‘real’ Smith raises the question; how much of Vile Rat was there in Smith to begin with?

“For some players, the avatar becomes a purposeful projection or idealization of their own identity, while for others, the avatar is an experiment with new identities”, writes Yee in an analysis on one’s online avatar and identity. “Introverted players tend to create characters that are projections or idealizations of themselves, while extraverted players tend to experiment with new identities through their characters.”

While the thought of complex identity formation and motivations may seem bizarre to those whose experience within the realm of MMOs is derived primarily from time spent killing cows and chopping down trees in “RuneScape Classic,” the creative capacity for expression inherent within the genre — coupled with the relative anonymity of online play — provides fascinating insight into the minds of these players.

“Whatever MMORPGs are, or will become, one thing is clear”, writes Yee. “They are not just games.”

Robinson Meyer. “How to Write a History of Video Game Warfare.” The Atlantic.

Written By
Jeremy King
More from Jeremy King
Think of the last time you went to see a movie with...
Read More