I was excited to write about Purple Mountains for this issue of the magazine. Released July 12th, the album Purple Mountains and the accompanying band of the same name was a comeback of sorts for David Berman, who previously developed a cult following in indie rock with his band Silver Jews before quitting music in 2009. The album was a triumphant return—one of his best works. I was excited to tell the story of an artist starting a new chapter in his career and in his life, and perhaps cover his Portland concert in September. And then, 27 days after Purple Mountains was released, David Berman died.

Berman had long suffered from what he described as “treatment-resistant depression,” and his death was ruled a suicide. It was a tragic, unexpected loss that was amplified by his recent return to music. He was set to begin touring just days after his death. It hit me harder than most celebrity deaths. Berman felt so human and relatable, and yet was so gifted. The public mourning from a wide, eclectic set of voices in the music industry spoke to the singularness of his music and its ability to personally connect with so many.

Berman was one of the great lyricists of our time, and had an authorial voice unlike any other. Poetic turns of phrase (“in 27 years I’ve drunk 50,000 beers / and they just wash against me like the sea into a pier”) feel at home alongside funny, peculiar lines (“when the governor’s heart fails / the state bird falls from its branch”) in Berman’s discography. But his words are forever tied to his deep, droll, unique singing voice. In his hands, existential meanderings could sound like mere observations (“the meaning of the world lies outside the world”), potentially absurd images could carry serious emotional weight (“I believe the stars are the headlights of angels / driving from heaven to save us / look in the sky / they’re driving from heaven into our eyes”), and simple statements could feel inexplicably profound (“all my favorite singers couldn’t sing”).

Purple Mountains’s ten songs feature Berman’s trademark lyricism and effortless rhyming once again out in full force, this time with a bit more bluntness than the often abstract poeticism of his Silver Jews output. The topics on Purple Mountains are a bit more obviously autobiographical: that persistent, overwhelming depression; the slow march towards his separation from his wife of many years; the distinct experience of loneliness later in life; the loss of his beloved mother; existential disappointment.

The music on Purple Mountains is rich and dynamic while leaving the spotlight on Berman. To produce and accompany his songs, Berman recruited Jarvis Taveniere and Jeremy Earle of the band Woods. The country and honky-tonk twang that was present to varying degrees in much of the Silver Jews discography returns, but a wider array of instrumentation also keeps the project feeling distinct from Berman’s previous band. “That’s Just The Way That I Feel” is a highlight that opens the album in a rollicking fashion. It signals Berman and his wit are back in full force (“When I try to drown my thoughts in gin / I find my worst ideas know how to swim”), even as the song plays like an itemized list of various miseries Berman has encountered since he last sang for us a decade prior. It builds to a clever chorus that feels representative of the conflict at the heart of the project. “Well, a setback can be a setup / for a comeback if you don’t let up / But this kind of hurtin’ won’t heal / And the end of all wanting / is all I’ve been wanting / and that’s just the way that I feel,” he sings. The inherent hope of Berman’s comeback to music is at odds with the exhausting despair he has been battling for years.

“Margaritas at the Mall” is a booming, horn-laden jam that takes a step back from the autobiographical to existentially consider the state of the world: “How long can a world go on with no new word from God?” Elsewhere, Berman lets the album linger on his personal sources of sadness in plainspoken directness. “I Loved Being My Mother’s Son” is a heart-on-the-sleeve ode to Berman’s late mother with two beautiful, restrained guitar solos. “Nights That Won’t Happen” is one of the most solemnly poetic tracks, a slow-building meditation on death in which Berman concludes: “This world is like a roadside inn and we’re the guests inside / and death is a black camel that kneels down so we can ride / When the dying’s finally done and the suffering subsides / all the suffering gets done by the ones we leave behind.”

Given the material, many of the songs have become harder to listen to since Berman’s death. It’s suddenly become difficult to sing along to the danceable, earworm chorus of “All My Happiness Is Gone” now that the songwriter is gone as well. The album’s straightforward discussion of hopelessness and accepting attitude toward dark emotions feels more complicated in the wake of his suicide. In some ways, listening to it now, it feels like an album of defeat. It is tempting to read into certain lines as if he knew what was to come. “The dead know what they’re doing when they leave this world behind,” he sings on the now-bittersweet “Nights That Won’t Happen.”

But Berman didn’t write these songs in the moments before we lost him. If anything, the very existence of the album is a triumph over the hopelessness that depression can cause. Berman was a meticulous writer. He wrote these songs over numerous years and they’re the result of a triumph over the call of the void. “I spent a decade playing chicken with oblivion,” he sings on the album, describing his years away from music. Berman was only able to make this album specifically because he was able to persevere for many years through the bleakness that the album describes. 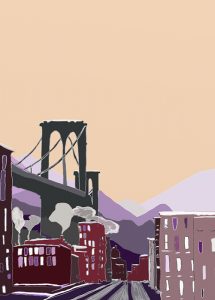 This is not to discount the severity of Berman’s struggle, only to emphasize that recontextualizing a reading of the album in the context of his death gives more agency to the one unfortunate day that his clinical depression won out than his own thoughtful songwriting process. One of Purple Mountains’s great accomplishments is the way it documents highly relatable depictions of hopelessness and the daily fight that is living alongside depression with a clarity and cleverness that only Berman could provide. Berman doesn’t shy away from it on the record, rather he shares his difficult reality with great generosity and a gentle empathy toward himself.

It’s a strange form of grief, mourning the loss of an artist like Berman. In a moment, the ongoing, years-long journey of their work and the potential of their future crystalizes into something concrete, unchanging: a legacy. We confront cognitive dissonance over the fact that their body of work is finite and finished forever. Berman has written everything he ever will. Full stop. That sucks. It is made acutely difficult given the circumstances of Purple Mountains’s release: a confident return to making music with an album that listeners were just beginning to form a relationship with when we lost him. How do we cope with the feeling of being suddenly left alone with these songs?

Fortunately, Berman has already done the hard work of finding perspective on the matter for us. Midway through the album, over warm organ and dreamy horns on the surprisingly simple and sentimental “Snow is Falling in Manhattan,” Berman places a beautiful little metaphor about the nature of music: “Songs build little rooms in time / and housed within the song’s design / is a ghost the host has left behind / to greet and sweep the guest inside / stoke the fire and sing his lines.” Berman is with us through his music—his words and voice continuing to reverberate through our lives, a friendly apparition providing our souls some shelter from the storms of this difficult world.

Written By
Shane Johnson
More from Shane Johnson
To many, the new year is a time for looking ahead to...
Read More