The assembly room of the St. Johns Community Center is filled to capacity on the night of 13 January. Grumbling and impassioned conversation can be heard in the crowd as volunteers roll additional seats into the packed standing-room. Board members for the St. Johns Neighborhood Association claim they have never seen such a large attendance at a monthly general meeting as they implore the membership to be courteous and contain their emotions. The subject of so much attention is a controversial syringe exchange operated by Portland People’s Outreach Program (PPOP). 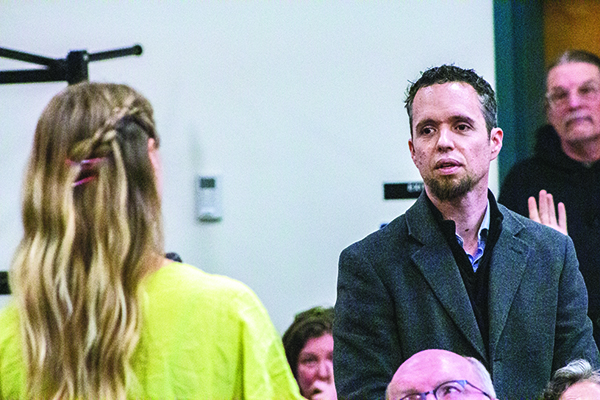 A resident voices concern about hypodermic needles found in the St. Johns neighborhood. all photos by Vivian Veidt.

Syringe exchanges are part of a movement known as harm reduction. Harm Reduction Coalition (HRC), a national organization, defines the movement as “a set of practical strategies and ideas aimed at reducing negative consequences associated with drug use.” These strategies include individualizing experiences with drug use reduction initiatives, providing non-coercive and non-judgemental services, recognizing demographic and societal factors that make individuals vulnerable to drug-related harm, and providing clean supplies to reduce the public health impact of drug use. Syringe exchanges—services for injection-drug users to return used syringes and receive sterile supplies—are exempt from laws prohibiting the distribution of drug paraphernalia. ORS 475.525(3) excludes hypodermic needles and syringes from the definition of drug paraphernalia; in June of 2019, lawmakers passed House Bill 2257 which not only defines substance use as a chronic disorder, but also exempts all supplies provided by syringe service programs from the definition of drug paraphernalia.

PPOP has been operating weekend syringe exchanges in Portland since 2015. The service provides “need-based” access to hypodermic needles, cotton balls, tourniquets, alcohol pads, and small metal pots used for heating substances—called “cookers.” Need-based syringe exchanges operate on a model that provides supplies based on a client’s needs without a requirement to return used supplies for service. PPOP also provides access to naloxone, a powerful opioid overdose reversal drug recommended by U.S. Surgeon General Jerome Adams. PPOP has operated a mobile outreach program since the organization was evicted from its building in St. John’s in 2018. 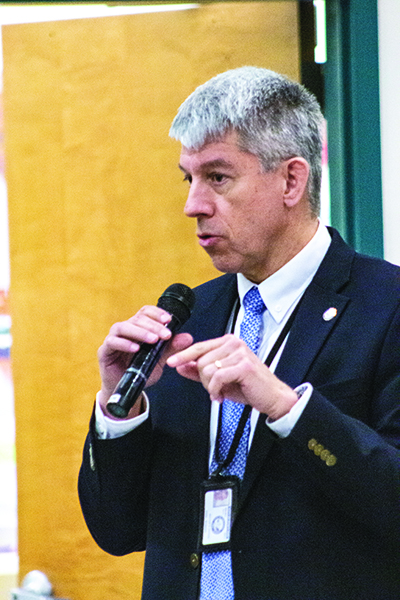 The meeting of the neighborhood association continues, acknowledging the controversy that has filled its seats for the first time. Chairperson Marisa Peter asks guest Robert King—Senior Public Safety Advisor to the Office of Mayor Wheeler—for an opinion on the legal status of syringe exchanges. In his reply, and speaking as a city official, King erroneously describes harm reduction as an endorsement of drug use and would later refer to PPOP and audience-members as “advocates of the use of heroin and methamphetamine.” Harm reduction is a philosophy grounded in reducing the public health burden of drug use. Neither PPOP nor HRC endorse illegal drug use. During the following question period, which reveals the audience to be nearly evenly divided on the issue, an audience member speaks over opposition to correct the record on the legality of syringe exchange services by referencing House Bill 2257, which became law in 2019 and exempts all supplies provided by syringe service programs from the definition of drug paraphernalia.

Public health researcher and PPOP volunteer Justine Pope takes the stage with PPOP volunteer Jennifer Phillips to deliver a slideshow overview of harm reduction and PPOP’s syringe exchange program. The atmosphere becomes overtly hostile when Chairperson Peter describes the time allotment for PPOP’s presentation as five minutes shorter than the agenda states. The conflict plays out with Chairperson Peter redacting her claim and deferring to the agenda, but the tension of the moment is never repaired. Resuming her presentation, Pope alleges that the St. Johns Neighborhood Association has made “persistent legal threats toward [PPOP] community service providers,” perpetuated misinformation about PPOP, and that “board members have personally attacked PPOP,” further claiming that the organization is not trustworthy to handle queries on behalf of the syringe exchange. 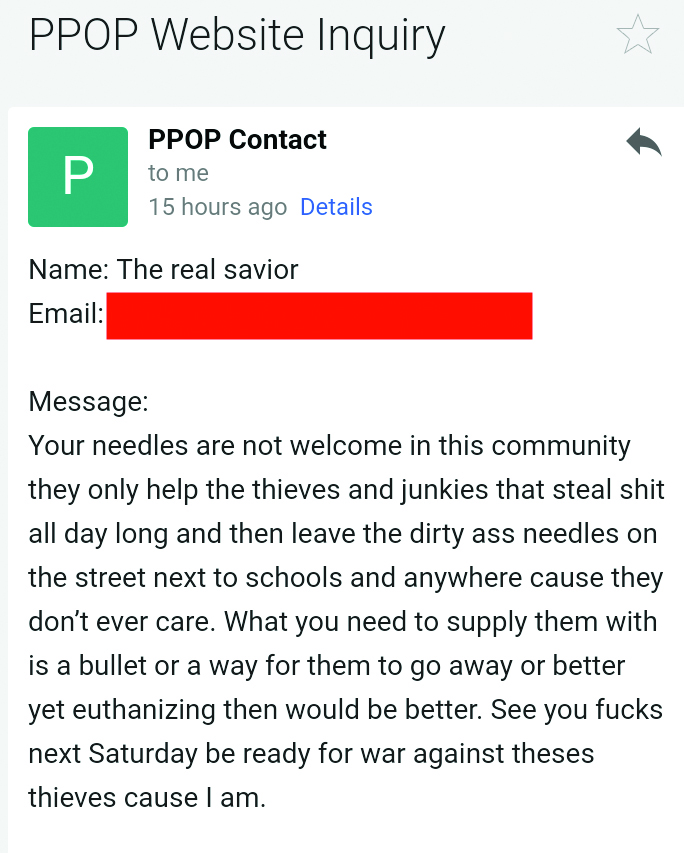 A threat made against patrons of PPOP through the PPOP website in January, 2019.

Conflict between parties irrevocably escalates when presenters Pope and Phillips continue speaking after Chairperson Peter calls for an end to the presentation to adhere to the printed agenda. In defense of her action, Pope claims that she did not consent to the allotted time restraints prior to the assembly. The meeting transitions slowly to its open question period, during which two audience members request the completion of the interrupted presentation, at which time Pope and Phillips resume their presentation to vocal opposition from the audience. One community member, Eric, advocated for PPOP and described the ways the program helped them seek addiction treatment. “If it wasn’t for them,” he said, “I probably wouldn’t be here to tell you guys about this now.”

Another audience member asked how distributing meth pipes and cocaine inhalation devices reduces harm to the neighborhood, but was not satisfied by Pope’s answer that it promotes safer ways to use drugs than injection. Pope quickly moved to the next question.

“I don’t deny what you’re doing as a service is helping the people that you’re servicing,” offered Cory Gates, a 13-year resident of St. Johns. He explained that the community’s anger comes from stress over weekly car break-ins and littered needles by the bike path. “I can’t walk my children through that area,” Gates complained before directing a question to King: “What is the city doing to help us…resolve this issue?” King suggested continuing the conversation in a follow up meeting that includes the Commander of Portland Police Bureau’s North Precinct.

Afterwards, Gates said he was not satisfied with King’s answer but is prepared to work with the city. Gates claims that he did not learn more about PPOP from the accompanying slideshow, adding “I couldn’t see it,” nor did it quell his concern that their needs-based model is responsible for the uptick in littered needles. “If it’s illegal, put it in an environment that is creating health services.” He would, however, consider a supervised injection site: “It’s got to be for the social welfare of the community and not putting the community at large.” Supervised injection sites are controversial programs that provide specially trained-personnel, including nurses, to monitor injection of illegal drugs. They operate in Canada, Switzerland, and eight other countries, but there are no legal supervised injection sites in the United States—yet. The Trump administration took a nonprofit in Philadelphia to court over their city-backed plan to open an injection site. While the judge is still deciding, California legislators are working on a bill and other states are interested.

The general meeting continues with its treasury report as the crowd leaves the main assembly to continue the conversation about PPOP in the adjacent hallways. Advocates and opposition to the syringe exchange program compete for attention as interested and unsatisfied community members filter out of the building with questions. Despite alleged legal threats and harassment, PPOP continues to operate as normal, but the future of the program is as uncertain as the departing audience.

Written By
Vivian Veidt
More from Vivian Veidt
In the months since nightly demonstrations began in Portland following the police...
Read More