article and photos by Margo Craig

Early Saturday Morning, the union representing classified employees at Oregon universities, SEIU, came to a tentative agreement with the Oregon University System (OUS) to put an end to a labor dispute. At Portland State University, employees are represented by the SEIU Local 503 chapter. SEIU members agreed to strike and walk out on the first day of the fall term if an agreement could not be met. Bargaining came to a standstill on August 16, when the union determined that negotiations were not productive and declared a strike.

The agreement is being hailed as a victory by the union. “This is a win for the 4,500 workers who dedicate their lives to Oregon universities,” said Melissa Unger, executive director of SEIU Local 503. “Workers stuck together to demand a contract that respects the critical role they play in supporting our students and keeping our campuses running. Together, we fought back take-aways proposed by management on wages, health care, steps, and personal days, and won higher wages for all workers. This hard-fought victory is a testament to the strength and solidarity of Oregon’s front-line university workers.”

PSU Interim President Stephen Percy emailed the PSU campus community stating, “It’s great news that on Monday our full campus community will be here to welcome our new and returning students on their first day of class.”

OPB reported that the union’s demands were met halfway by OUS.

Highlights of the tentative agreement include a 3% retroactive cost-of-living-adjustment dated back to July 1, 2019 and an additional COLA next July; the initially planned 10% healthcare cost increase for workers has been eliminated; employees will be given 48 hours of paid leave over a two year period that can be used if campus is closed due to inclement weather; removing the barriers to standard step 4.75% wage increases for classified employees who have not topped out; workers who have topped out will receive a “longevity premium” or “ongoing 2.5% differential” yearly.

The tentative agreement came after months of negotiation and most immediately following a 22-hour negotiation session.

However, for the past two weeks, this tentative agreement didn’t seem possible; SEIU workers and PSU didn’t appear to know how this week’s negotiations would pan out. 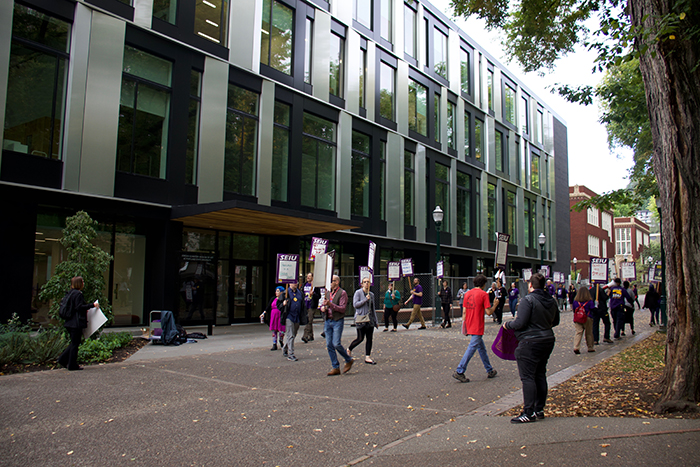 SEIU workers picketing outside 724 Harrison next to the Park Blocks on Sept. 26, 2019. photo by Margo Craig

Leading up to the agreement
International Union (SEIU) Local 503 and the Oregon University System (OUS) have been locked in contract disputes since February. SEIU Local 503 represents 4,500 workers in Oregon’s public higher education system. Classified staff work all over Oregon’s public universities in essential departments like financial aid services, food preparation and information technology. But those workers were poised to go on strike if OUS and SEIU’s higher education bargaining team didn’t come to an agreement by Monday, September 30th, the first day of Fall term. The crux of the dispute is about wages. The union is demanding two cost-of-living wage increases over the next two years and additional opportunities for raises for longtime employees. OUS denied the latter and offered a smaller wage increase. The union rejected the counteroffer. Workers have already voted overwhelmingly in support of a strike if negotiations fail.

also on “move-in day” #seiu classified workers picketing outside 724 Harrison, prepared to go on strike if #seiu503 and the university don’t come to an agreement over contract disputes by Monday https://t.co/4lulos0qaY pic.twitter.com/Krb7txXqXv

On Thursday, September 26th, plenty of back-to-school activity was afoot on “Move-In Day” at PSU; Interim President Stephen Percy chatted with students and families as they lined up to truck luggage up to dorms. PSU’s streets teemed with activity. Days before Fall term begins, campus was cheerful and serene. It may seem calm now, but that morning, PSU got a whiff of a potential storm ahead.

SEIU workers rallying outside 724 Harrison next to the Park Blocks on Sept. 26, 2019. video by Margo Craig

Classified staff from Oregon’s public universities rallied for the second time in a week outside 724 Harrison. Last week, Interim President Stephen Percy tweeted that he was “excited for the formal opening” of 724 Harrison, “our modernized, one-stop-shop to serve students’ financial, advising, and academic needs.” Old Neuburger Hall closed in January 2018 for a $71 million renovation; the worker’s rally was meant to disrupt the grand opening. But, after OUS and SEIU 503 failed (yet again) to negotiate in mediation, the university cancelled 724 Harrison’s grand opening. On Thursday, it reopened unceremoniously with no donors or high level administrators there to cut a ribbon. Instead, a handful of students stood in line for registration and financial services while outside, about 50 spirited union members marched, chanting slogans like, “Chop from the top!” “No contract! No peace!” and “You can’t break our union down—Portland is a union Town!” It was the second rally of the week. 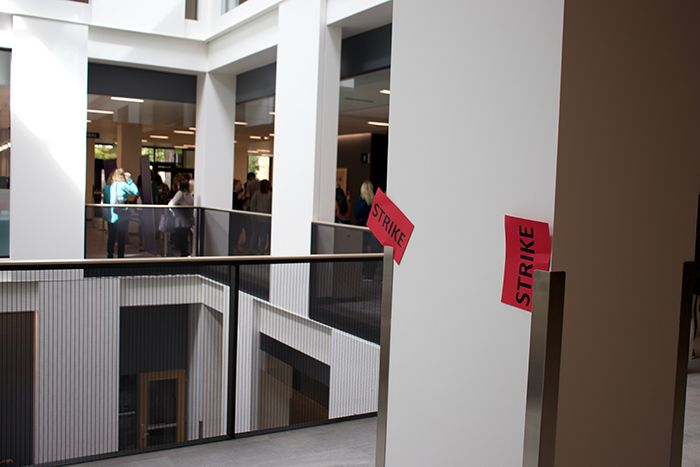 Percy posted a message to the website of the Office of the President assuring the Campus Community that, if a strike occurs, PSU will still open Monday, September 30 “with normal operations and class schedules.”

But the union workers expect chaos if they don’t show up on the first day of the busiest term of the year. “They need us more than we need them!” one worker yelled over the megaphone.

“We are like the backbone of this whole institution,” Thuy Huyen told The Pacific Sentinel during the rally. Huyen has been an accounting technician at PSU for 17 years. Part of her job is to fix technical issues on campus. “I deal with every single building—touch every single building—on this campus,” Huyen said. If her office goes on strike, Huyen says “it’s going to be crazy, because everybody depends on us. Everyone.”

Huyen said the strike would also affect the jobs performed by many students. Even though workers on strike cannot tell students to skip work, many students work under the supervision of a classified employee. “Without us,” Huyen said, “I think this whole place would be shut down.”

Rex Marshall, a staff member in Millar Library, is also ready to go on strike next week. He plans plans to picket in the Park Blocks and anticipates a robust turnout. “95% voted to strike in the Union! That’s a big deal.” Without library staff, Marshall expects that students won’t be able to check out materials, let alone find them. Even if the university hires temps to step in, per Marshall, “there is no chance” they’d be able to do what permanent staff does. “It’s too specialized to train a temp.”

Some of the rallying workers were PSU alumni. “I’m here because I got a degree from this university,” Grace Piper said over the megaphone. “Now I’m employed by them and they won’t give me a fair contract!” The crowd booed. 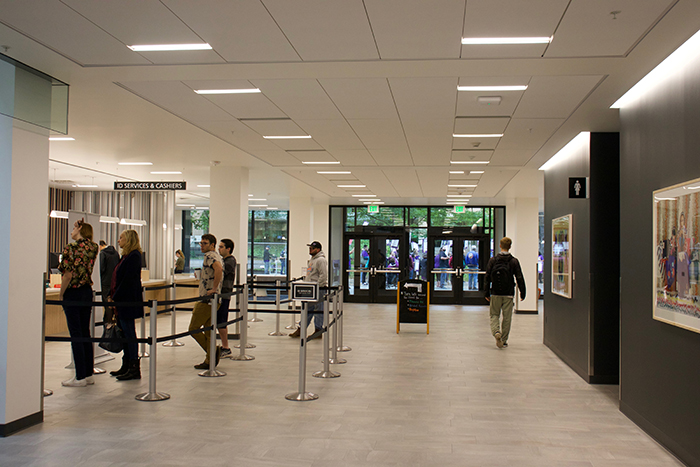 As students line up for student services inside 724 Harrison, SEIU workers are seen picketing just outside the door. Sept. 26, 2019. photo by Margo Craig

Union supporters stood on the periphery, and cheered on the protest. Joe Daunt, a worker’s husband, lives in Portland and works in Beaverton, showed up to support the picketers. “my wife works on campus so I have an interest, but I’m just here to support the employees because I know that the higher ed workers have gotten the short end of the stick for many years, really.”

Several members of the American Association of University Professors (AAUP) union came out to support but didn’t want to go on record for fear of compromising SEIU’s bargaining.

On Friday afternoon, Jen Duggar, director of the Disability Resource Center sent out an email to the DRC listserv. Students should still go to class, but “can expect a delay in services all over campus.” The email adds that, as long as there is a strike, the DRC will close an hour early at 4 PM. It concludes: “We hope a solution is agreed upon soon and that all get what they need and deserve.”

For the moment it appears that the classified employees union, SEIU, and PSU have come to an agreement that both sides feel fairly positive about. The walkout has been averted for now and the tentative agreement is set to be voted on and ratified by union members in the coming weeks.

Written By
Margo Craig
More from Margo Craig
On November 1, 2019 more than 100 racist stickers were found on...
Read More