Last month, following a long investigation, Dallas Morning News and NBC5 reported an incident that occurred in Dallas, Texas in 2016 that was virtually identical to an event in Portland last November. The incident in Dallas received national attention after a federal judge rejected Dallas police objections and ordered the release of body camera footage recording what happened three years ago. We watched a man die in police custody. The video was graphic. The man’s death was unnecessary.

Dallas, TX, August 2016
On August 10, 2016, 32-year-old Tony Timpa called 911 for help. He told the dispatcher that he suffered from schizophrenia and depression, that he had not been taking his prescribed medication, and that he had used drugs. When the police arrive, Timpa had already been handcuffed to a sign in a parking lot by a security officer. The police are talking amongst themselves when Timpa starts to yell for help. An officer instructs Timpa to “get on the ground.” Timpa replies, “No, you’re gonna kill me.”

The police force Timpa to the ground and restrain him—prone (on his stomach) with his hands handcuffed behind his back and legs zip-tied together—for 14 minutes. All the while, Timpa pleads for help. After long minutes of struggling, Timpa suddenly stops moving and is silent.

During the incident, the police crack jokes and mock Timpa. When paramedics arrive, they realize that Timpa is unresponsive. Paramedics give him a sedative anyway. Timpa is unconscious for at least four minutes before the paramedics administer CPR. By that time, Timpa is dead. 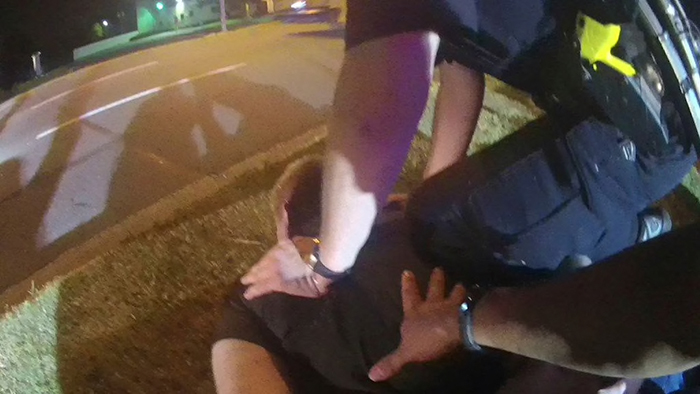 One of my 1st records requests when I joined @dallasnews was for body camera footage & records of Tony Timpa's 2016 death involving Dallas Police officers. Today, we got those records b/c a federal judge agreed you should see them. Story w/ @Dave_Boucher1 https://t.co/RFp1gFBL8k

Portland, OR, November 2018
In Portland, November 2018, Richard Barry died in virtually identical circumstances. According to the body camera footage from Portland State University Police, campus police found Barry running in the street shouting, disorganized and disheveled. Barry is clearly agitated and paranoid, experiencing some type of psychotic break, either drug induced or psychiatric in nature.

Barry may not have called 911, but he did ask police for help. Instead, what happened to Tony Timpa happened to Richard Barry. Barry is forced to the ground and restrained on his stomach with his hands handcuffed behind his back and legs pinned to the ground. Like Timpa, Barry struggles and yells “Help me” over and over and over again. Like Timpa, the moment comes when Barry is suddenly silent and ceases to struggle, a moment first responders somehow fail to notice. Instead, police crack some jokes. Paramedics arrive and perform an assessment so sloppy and cavalier—had it been a practical for the most basic level of EMT certification, they would have failed. The footage cuts off before anyone realizes that Barry is unresponsive. Despite CPR and epinephrine, Barry is pronounced dead at the hospital.

For those that die in the custody of Oregon State Police, the Oregon State Medical Examiner’s office determines the cause and manner of death. Medical examiners tend to attribute fatalities like these to drug overdose, thereby ruling the death an “accident” that officers did not cause. That’s how Barry died, according to the Multnomah Medical Examiner.

The medical examiners in Dallas, on the other hand, ruled Timpa’s death a “homicide” from “sudden cardiac arrest, due to the toxic effects of cocaine and the stress associated with physical restraint.” A grand jury found the officers acted recklessly and voted to indict them for misdemeanor deadly conduct. But the Dallas County District Attorney dropped the charges and the officers are back on duty. 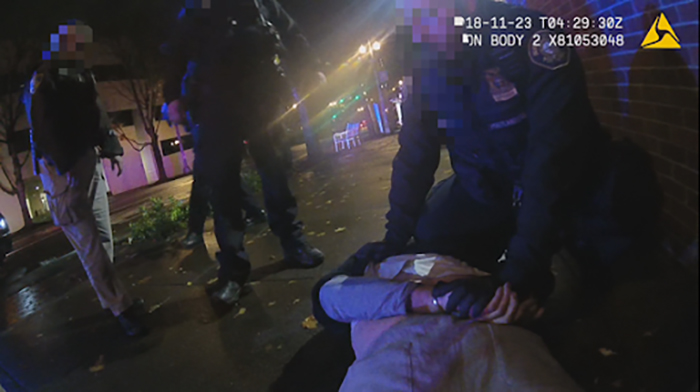 In 2016, Tony Timpa called 911 and asked for help. Afraid, he ran out of a store and was handcuffed by security guards. Dallas police arrived, and within an hour he was dead.

Now, @DallasNews has obtained the body cam footage from that day. https://t.co/lA83lgTcen

Dallas Police officers, like officers with the Portland Police Bureau (PPB) and Portland State University Campus Police and Public Safety, are certified first responders. They are trained to respond to medical emergencies, to provide pre-hospital treatment like first aid and CPR. Since the footage was released last month, the Dallas officers offered an explanation: when Timpa became unresponsive, they thought he was being “overdramatic” and they said officers made mocking remarks to elicit a response from Timpa.

Portland police, on the other hand, have not had to offer any explanations. But no one seems to be demanding any. Even with footage (a rarity since PPB doesn’t use body cameras), no one is talking about how first responders mishandled their encounter with Richard Barry. Campus officers failed to call paramedics; alongside  police officers, they failed to realize Barry lost consciousness; astonishingly,, paramedics failed to even recognize it. Had this been a practical for the most basic level of EMT certification, everyone would have failed.

To top it off, what did officers do as soon as Barry stopped making noise and moving? They complained about blood on their uniforms.

But the way police handle mental health crises is not a new issue in Portland. Portland Police have an established history of using unnecessary force against people exhibiting erratic behavior. In 2012, after an 18-month investigation, the United States Department of Justice found a pattern of excessive use of force by Portland Police against people suffering from mental health crises. Portland Police agreed to adopt new policies, training and oversight, including a system to track interactions between officers and people with mental health issues. But, according to a report filed in federal court in January 2019, it is not clear how effective the changes have been thanks to an inadequate data tracking system.

Law enforcement alone is not the best response to mental health and addiction crises. The sooner it is possible to bring in mental health professionals to such situations, the better it will be for all concerned. A promising first step is underway. City Council voted to figure out how Portland can add a medical and behavioral health service to the public safety system, as proposed by the nonprofit newspaper, Street Roots. The “Portland Street Response” would be an adaptation of the “Crisis Assistance Helping Out On The Streets” (CAHOOTS) program that is in operation with great success in Eugene. The result should be swift dispatch and deployment of physicians, social workers and other first responders better trained to handle these situations.

That being said, police can do one simple thing: don’t tie people up in a prone position, especially if that person exhibits symptoms of Excited Delirium Syndrome (ExDS). The American College of Emergency Physicians Task Force agree it is a real syndrome with uncertain—likely multiple—etiologies (possible causes). The exact pathophysiology of ExDS is unclear so there isn’t a test out there to diagnose it definitively. It’s characterized by extreme agitation, hyperthermia and heart-racing during stress, typically associated with drug use and/or unmanaged mental illness. ExDS is also associated with sudden death in custody.

Dating back to 1800, ExDS-like conditions were seen in asylums, primarily described in forensic literature since it had a 75 percent mortality rate. When antipsychotic pharmaceuticals came around in the 1950s, ExDS-like deaths plunged. In the 1980s, with the widespread use of drugs like cocaine, ExDS-like deaths spiked again but these individuals did not always have a history of psychiatric illness. Today, regardless of etiology, it is widely accepted that most lethal ExDS patients die during or shortly after a violent struggle.

Most cases of ExDS have been linked to long-term abuse of certain drugs such as methamphetamine, cocaine, PCP and more recently, bath salts and flakka. Studies suggest ExDS doesn’t necessarily depend on the dose of drugs used, but that chronic users undergo gradual neurological changes and become more susceptible to ExDS over time.

Furthermore, ExDS can cause a heart attack. A 2010 review published in the American Journal of Forensic Medical Pathology suggests that ExDS deaths are related to stress cardiomyopathy, also known as “broken heart syndrome,” when adrenaline from emotional distress causes a heart attack. To make matters worse, the same drugs that cause ExDS also damage the heart over time. These conditions are precarious to say the least.

So what can first responders do with such agitated ticking heart bombs? For starters, stay vigilant in monitoring people in ExDS. The best way to prevent the sudden crash is to reduce stress: cut unnecessary stimulation like lights and sirens, de-escalate, get paramedics there as soon as possible to give sedatives and to get to a hospital. While restraint isn’t the only way to induce a cardiac emergency, it can certainly make a fatal outcome more likely. One study warns against hog-tying a person in prone, not because it impedes breathing, but simply because this restraint induces fear by triggering the sympathetic nervous system, i.e. the “flight or fight response.” Sedatives before restraint seems to be the best solution.

It’s tough getting the police to change their ways, but there is one person that could have done something by now. The medical examiner could improve police practices by identifying the trend of deaths that happen in custody. To do that, a death investigation should not end when methamphetamine or cocaine is discovered in the system. Neither stimulant causes fatal overdose at one finite level; the determination between “toxicity” and “intoxication” is to some degree speculative. But the data is clear: an overdose of meth or cocaine kills in one way but intoxication can kill a person with a history of drug abuse in a different way.

Circumstances surrounding in custody deaths are often unclear. Autopsy reports are seldom made public and mortality data is ambiguous. Furthermore, death trends get concealed if the medical examiner is not consistent. Medical examiners did not determine that Timpa or Barry died from ExDS, even though both cases fulfill all criteria. In 2013, however, the medical examiner found that two in-custody deaths were in part caused by ExDS and methamphetamine intoxication. In separate incidents, police used Tasers to take down Walter Ray McKelvey and Gregory Allen Price. Both died soon after, struggling in restraint.

The hard truth is that, while conceding that managing situations like the ones described above is challenging, these two individuals would be alive today had the police been more experienced and knowledgeable. And, it is too easy for law enforcement and medical examiners to blame bad outcomes on methamphetamine or cocaine overdose when those bad outcomes could be avoided with improved police procedures. Providing those officers with alternative ways of managing those individuals—that will protect the police as well as the public—without forcing them to the ground and, under restraint, to lie on their stomach in a prone position will save lives.

The simple truth is we can do better.

Written By
Margo Craig
More from Margo Craig
By a show of hands, it was the first time many in...
Read More