Born in Colorado in 1972, Jeffrey Gibson has ignited an artistic movement honoring Portland’s indigenous community. A descendant of the Cherokee nation, Gibson proudly reinvents the artistic community’s definition of Indian art. Displayed alongside the Dakota Modern by Oscar Howe, Jeffrey Gibson’s They Come from Fire and To Name An Other multimedia and visual artwork is showcased at the Portland Art Museum, exploring how indigenous communities have been erased and barreled over even in modern times.

Arriving at the museum, brightly colored boxes line the outside of the brick building. In each of these boxes a year is given preceded by an historical event. Examples of this include 1847 The Cayuse War, an armed conflict taking place in the Northwestern United States begins in 1847 and continues through 1855.  Another example, June 24, 2022, U.S. Supreme Court overturns Roe V Wade. A more uplifting historical reference, August 13, 1954, President Eisenhower approves Public Law 588 ending federal supervision over the trust and property of Indigenous tribes in Western Oregon.

However, even in these more “uplifting” episodes of history messaged on the side of a dominantly white city’s Art Museum, one cannot feel anything but remorse. Had the indigenous population’s rights not been stripped from their communities, a box acknowledging the rights be given back to the natives seems more harrowing than positive. Placed alongside the more violent, dismal epochs depicted, the brightly colored boxes surrounding these texts feel almost satirical, protesting the dark and bleak nature of these events.

As one enters the art museum large, colorful, and transparent rectangular shapes dangle from the ceiling and illuminate the space. Here we see bright, vivid, and electrifying colors with a curly, lacey font. “They rewrite their story. Speak to your ancestors. They choose love.” These affirmations further exemplify the need for restorative exposure our Indigenous, and underrepresented, communities deserve.

A quote from Jeffrey Gibson, in white text against a black colored wall, reads “I want the overall work to point to narratives that may not be popularly known outside of these local communities and to celebrate the photographed individuals as leaders and innovators in the world today.”

This exhibit allows the viewers to feel the artist’s voice penetrate the motive of this showcase. His words, placed against the blackened wall, authentically capturing the honesty behind his work. Where brightly colored texts, backgrounds, and images protrude through the darkened history, this quote stands absolute, acknowledging the erased history that continues to define the Native community. 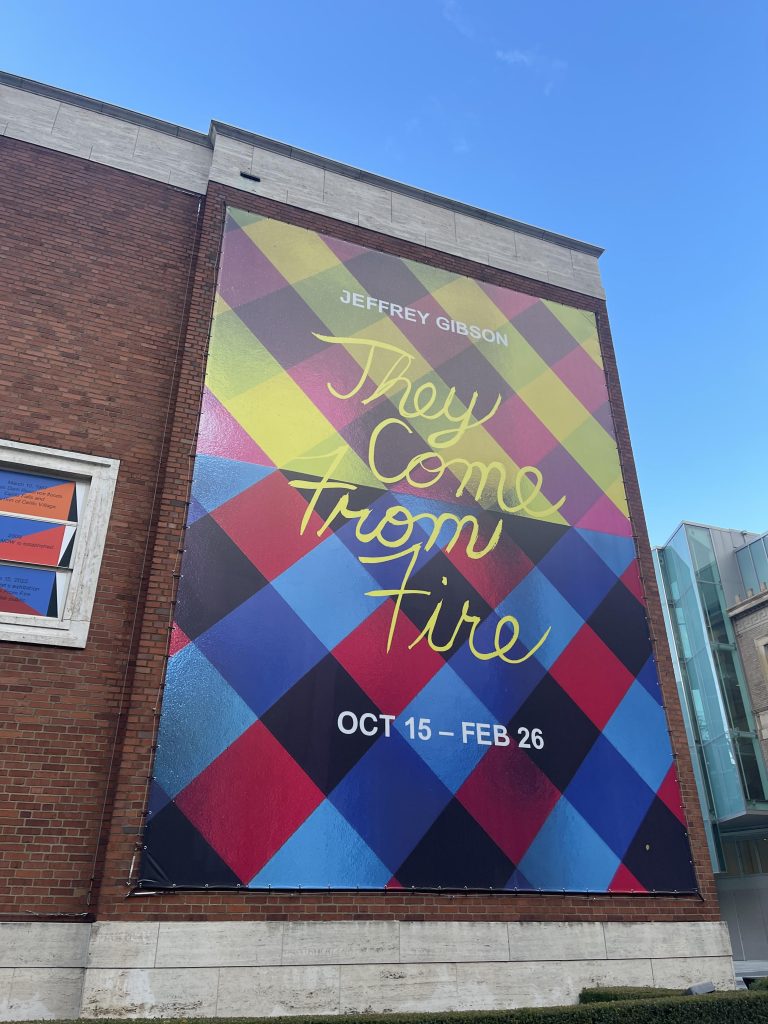 Traversing to the second floor, another black wall with pink lettering To Name An Other, appears. It reads,“Community, empowerment, and visibility are the heart of the ongoing performance work, To Name An Other, by multimedia artist Jeffrey Gibson, who is a member of the Mississippi Band of Choctaw Indians and Cherokee descendent.”

The text goes on, “The fifty pairs of matching tunics and drums in this installation are emblazoned with phrases that challenge limiting ways we identify ourselves and each other, and surface how these ideas interface with expectations surrounding race and gender.” The sound of drums and chanting can be heard from behind this wall, amplifying their messages. The pacing of the drumbeats is calm, yet loud. Viewers, seemingly entranced, are pulled to the next room.

Planted between two large halls displaying traditional European white based paintings, Gibson’s display of dozens of flashy tunics uniformly sprawls across the space. The tunics each interface powerful statements printed on the fabric. She protects the land. His prayers heal us. She plays with fire. One may not consider using colors like lime green or hot pink to anoint important works of art, but Gibson successfully uses these colors to slap back the brooding history that keeps the underrepresented constrained. They cannot be constrained. Here they are. Brighter than that which tries to bind their existence.

Mingling with Jeffrey Gibson’s art, it seems as if Portland’s Art Museum has its own message to conjunct alongside Gibson’s. Museum goers are then pulled into the rooms on either side of Gibson’s loud multimedia display, and into a world of European portraits. Paintings with use of the colors of brown, cream, navy blue, and gray; depicting a past where white male dominance overshadowed the “others” residing in the background. A lone black figure is shaded behind white characters in one painting. A portrait of cross-dressing men in another. Women, nearly all represented with naked children, look away to the side of these portraits.  These figures were painted by mainly white men hundreds of years ago. Gibson names these figures. 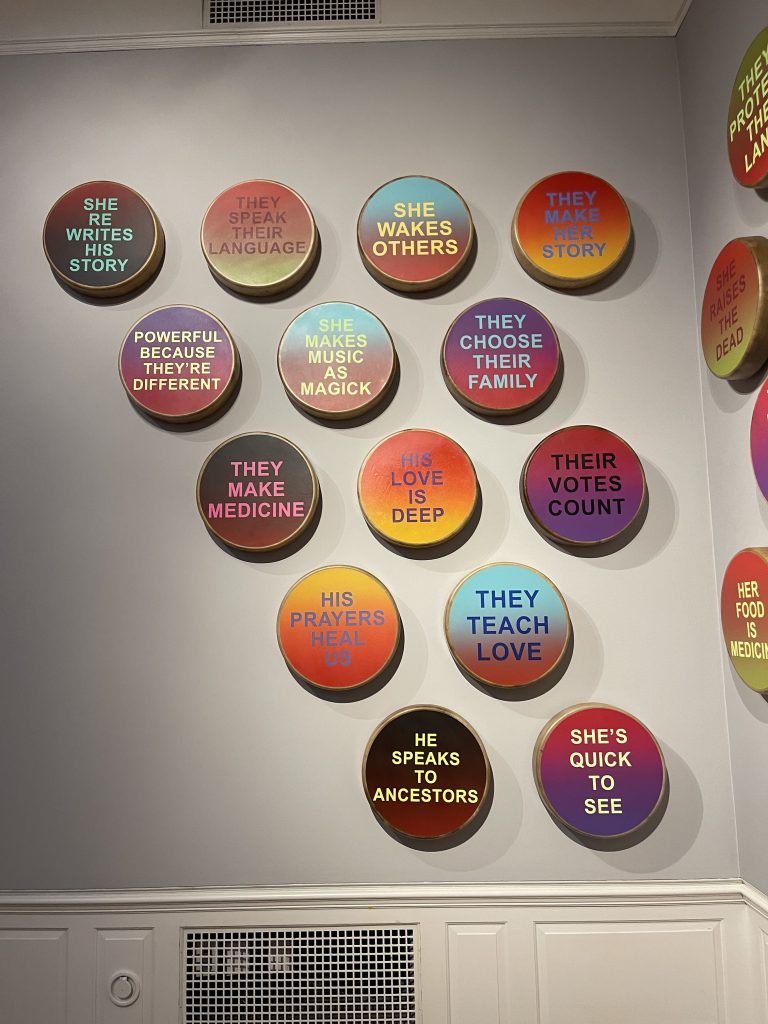