These are truly strange times. Like nearly everyone else, I’ve been trapped in my house for a month and time is beginning to warp around me. There is no longer morning or night; now, the only markers I have are my cats clawing me at sunrise to feed them, and New York Governor Andrew Cuomo’s daily press briefings. Every day I take a shower is a victory. The days are morphing into each other. The other day I thought it was Sunday; it was Tuesday.

With nothing else to do, I pace around the house as though waiting for something interesting to happen. I’ve baked at least ten loaves of bread. I’ve started a sourdough starter. (His name is Jack Sour.) I played through Skyrim for the 15th time, then moved on to my third playthrough of Oblivion. I ran around in Breath of the Wild for a week. I got back into Minecraft. I regretfully looked toward the pile of books in the corner of my room I always promised myself I would read when I got more time. (I haven’t.)

When the situation in the U.S. began to get bad, back in early March, my father and I ran to five different grocery stores to stock up on beans, lentils, toilet paper, flour, yeast, canned tomatoes, and everything else we could fit in our pantry. I haven’t left my neighborhood since then. I know many people have struggled with feelings of isolation and depression during quarantine, and I’ve felt the same way. It’s soul-crushing to not be able to see your friends, to go out, to touch or even stand within six feet of someone outside your immediate household.

One thing that’s given me hope is just how many people are becoming radicalized during this moment. It’s so exciting to see people who had previously quietly accepted the status quo be awoken to the fact that, “Hey, I am an essential worker. Why don’t I get paid $15 an hour?” I heard about a rent strike in Los Angeles, and I became hopeful for the first time in a long time that something might actually change because of this.

The rest of the time, of course, I’m yelling at CNN or curled up in the fetal position contemplating the sheer size of everything that’s happening right now. I took some of that pent-up stress and rearranged my room completely the first day in isolation. Then I rearranged it again. Eventually I ran out of things to rearrange, and went back to anxiety-watching the news. My time in isolation hasn’t been the most relaxing experience. 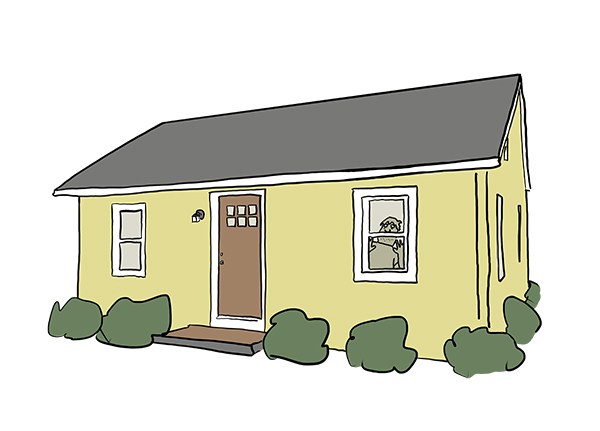 Now I’m left wondering how long this will go on. I think I can handle a few more months of this if I absolutely have to. I have to say, though, I do miss not having to cook every single meal for myself. And I miss parks. And coffee shops. And libraries. Man, the outside world is so cool. I used to think I would love staying inside, because I’m such an introvert. It turns out that when I’m forced to stay in, it kind of sucks.

My saving grace during this period has been cooking. I’ve cooked more in these past few weeks than I have at any other time in my life. I bought an ungodly amount of beans when all this started, and I’ve cooked them in every way imaginable. And I’ve baked so much bread. Oh, so much bread. I’ve made sourdough, sandwich bread, babka, cinnamon rolls, dinner rolls, bread pudding, croutons, breadcrumbs, and everything else you could possibly think of baking. I think baking is an unconscious self-soothing mechanism for me at this point: it takes my mind off of the horrors happening in the rest of the world, if just for a moment.

My sourdough starter is the perfect microcosm of my experience during this quarantine. Once a day, I get to take a break from the low-lying dread I feel every day and meditatively weigh out exactly 113 grams of flour and 113 milliliters of water, adding them to my bubbly starter and smelling the sour yeast waft into my nose. There’s something pretty wonderful about creating life in a time so full of heartbreak and death.

Written By
Nick Gatlin
More from Nick Gatlin
In recent years and months, organized labor has moved to the forefront...
Read More