Hunt Sales, the highly regarded rock and roll drummer, was in Revival Drum Shop
recently, speaking to a crowd of fans. “You know what it’s about?” he said to the shop’s owner,
José Medeles. “Preparation and opportunity—when they meet on that corner.” From the side of
the room, Medeles nodded along, lined with floor-to-ceiling shelves stocked with vintage snare
drums. For the latest in the drum shop’s Drummer’s Den event series, a crowd of 30 or so sat at
attention in unfolded chairs spaced out across a well-curated collection of antique area rugs. “I
thought I’d never get a good deal—I’m old,” he said from behind his 5-piece drum kit, snare
steeply tilted in front of him. “But I was ready,” he said. “I was ready.”

Sales had a tattoo under his eye and long, silver hair that draped from the brim of his
cowboy hat, and wore an argyle sweater-vest with no undershirt. He started taking drum
lessons at the age of six and embarked on his career five years later, when he and his brother
started Tony &amp; the Tigers—the band was featured on their father’s ABC television show The
Soupy Sales Show in 1965. “I was learning, just like I’m still learning,” Sales said of his first
band. “You gotta suck at some point.” He is best known for his work in the late ‘80s with the
David Bowie-fronted rock and roll band Tin Machine, and earlier work with Iggy Pop after, he
says, Iggy “got pulled up off the streets by David” in the mid ‘70s. After more than fifty years
drumming in other people’s bands, he released a record of his own songs in 2019 called Get
Your Shit Together, under the band name The Hunt Sales Memorial. At the drum shop, on a
borrowed guitar, he played a brand-new song called “Diamonds,” and then played the first half
of the song again, just for his own pleasure. “Fuck Tin Machine,” he said, cigarette in hand. “I
care about right now.” Sales started smoking before he turned 15, and his voice sounds like he
has gravel in his lungs.

Medeles, who turns 50 this year, decided to create the Drummer’s Den series after he
realized he wanted to share the conversations he was having with his friends and musical
heroes over coffee. He is intentional about how his life is structured, and values his freedom to
make intentional choices—inspired by his interest in stoicism. Away from the drum shop, he
plays with multiple bands, drives a slow ’52 Chevy pickup, tracks down gear for touring
drummers who need help and spends time with his wife and son. His third book just went into
production, and three records he played on will release this year. He’s often told he should start
a podcast, but for him the ephemeral nature of the live interviews with people he respects is
crucial. “Boy, we get total transparency,” he said. “It’s different when they know they’re being
recorded.” He only schedules an event when all the elements—scheduling, life energy, or an
artist traveling through Portland—fall into place. 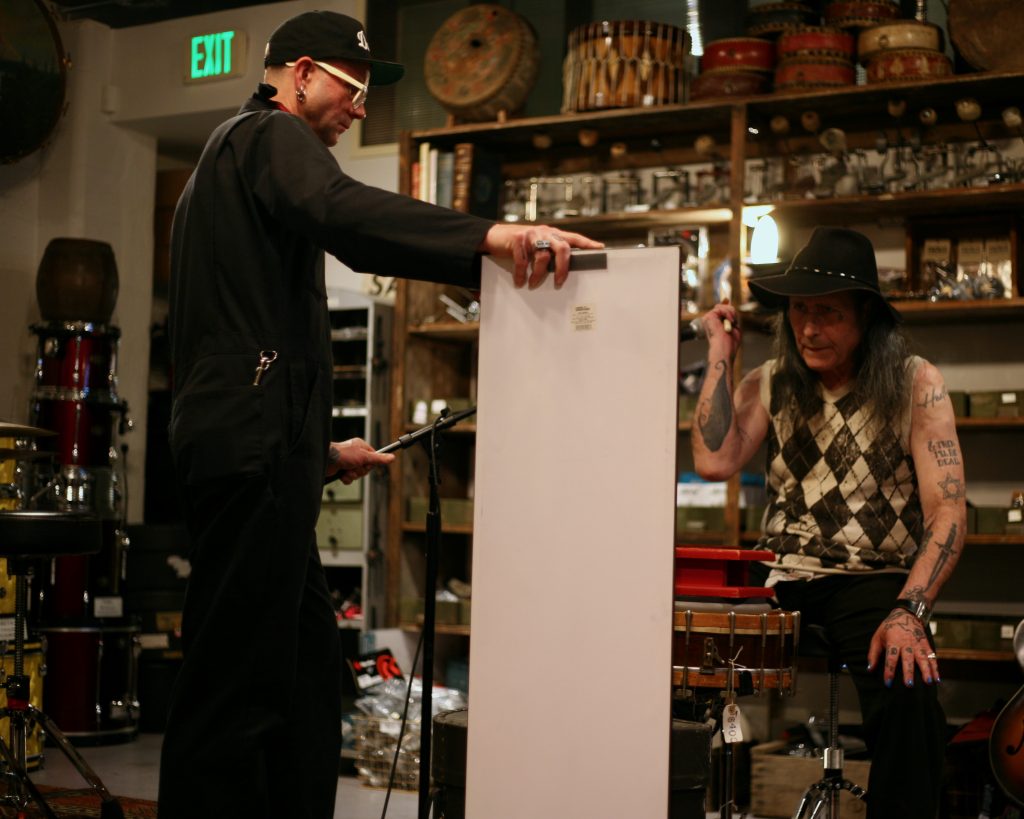 In the case of Hunt Sales, Medeles just wanted to see a hero and friend of 20 years for
the first time in a while, and to let him share his story. “His journey has been insane,” he said.
“He’s a true musical warrior.” Being born into show business, Sales saw firsthand how addiction
ruined the lives and careers of great artists. “I saw a lot of crazy shit, and swore I wouldn’t go
there,” he said. He did experiment with drugs at a young age, and ultimately developed a 40-
year addiction to heroin and crack until he became sober in 2017. His new life consists of his
kids, his wife, writing and practicing, followed by more writing and more practicing. He practices
drums in a mirror, so he can watch his technique closely. This focus has helped him stay ready
and sober for whatever might come his way. 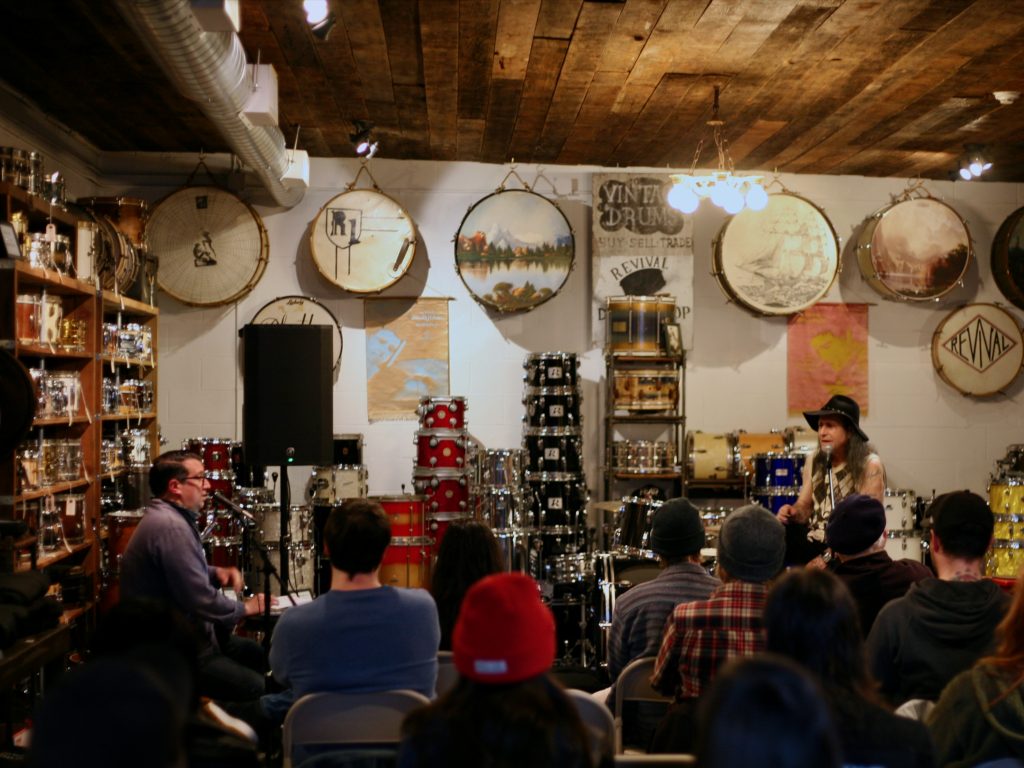 Medeles says of Sales that he is the person he is today because of his scars, some of
them self-inflicted, and some of them from the outside world. “He’s fucked up a lot, but he’s
given a lot of love,” he said. Sales is irreverent and never laughs at his own jokes when he
recounts the stories that have piled up over his 68 years on earth, among some of the most
enduring punk and rock musicians. “I didn’t get into it for the business,” he said of his long
career. “I did it for all the wrong reasons, which are the right reasons to me.”