We all live in our shells, some of us more than others. Many are waiting to come out of their
shells, many others’ shells have cracked, and they live life on the outside, while a further many
live life both in and out of them. Though yet, all of us, whether we’ve known life exterior or
interior to the shell, return to our shells eventually. So, what is it like to become the shell? What
does our shell represent? It could a protective layer worn to shield us from the outside world, or
even shield the outside world from the inner us. It is a symbol of our innate human vulnerability,
something which, no matter how in or out of it we reside, we all share, though we don’t always
recognize. Marcel, the Shell with Shoes on, is the embodiment of every meaning the shell
carries, but, unlike us humans, Marcel doesn’t have the option of crawling back into or hiding
inside of it, Marcel simply is the shell and has no choice but to embrace it.

With a limited release on June 24 th , 2022, and a nationwide release on July 15th, the feature film
Marcel the Shell with Shoes On adapts the popular YouTube videos into a 90-minute movie that
is a heartfelt journey of self-discovery and family reunion. Marcel is, as the title aptly states, a
shell with shoes on, who lives in a human-sized home in the city of Los Angeles which—after
being sold by a couple whose been divorced—has been repurposed into an Airbnb. A human
guest named Dean staying at the Airbnb, who we eventually learn is freshly separated from his
wife (if you haven’t yet guessed, separation from loved ones is a running theme throughout the
movie). Dean meets Marcel and gets his permission to interview him on camera and upload their
conversations to YouTube. The interviews paint a picture of Marcel’s day-to-day and how he has
adapted to navigating the relatively monstrously sized human household to sustain himself using
imaginative innovations like shaking loose fruit from a tree in the backyard with a contraption
made from an automated mixing bowl and an attached rope. 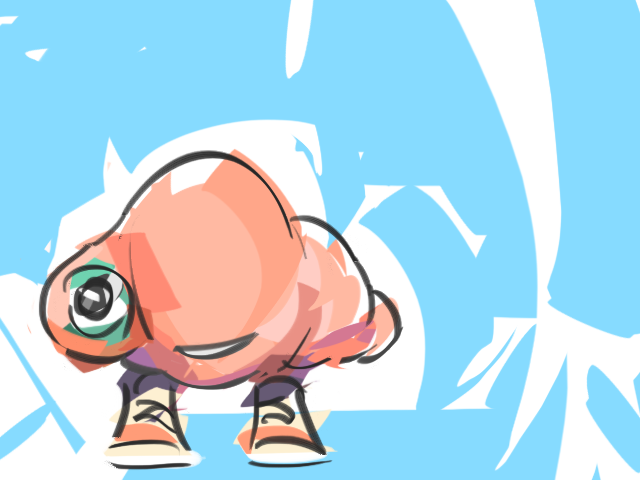 Through their ongoing discussions, Dean discovers that most of Marcel’s family was unwittingly
transported away from their home when the couple formerly residing in the home split up in a
sock-drawer they used as a panic room, leaving behind only Marcel and his
grandmother—voiced by beloved Italian actress Isabella Rossellini. Dean suggests that they use
Marcel’s newfound internet stardom to put out a call for anyone who might know the
whereabout of the previous homeowners to try and find where Marcel’s family wound up. This
leads Marcel on many ventures outside the house he’s called home his entire life and to discover
how big the outside world really is, not only when compared to him but at a proportion the
largest of the larger than life, most out-of-out-shells of us could possibly fathom.

One might not think that such a modest concept wrought from a series of cute, fun-sized
YouTube videos could meet the challenge of filling a full-length feature film, but Marcel the
Shell with Shoes On proves to be the little movie that could. Writer and voice-actor for Marcel,
Jenny Slate, gives Marcel an earnest innocence and star quality that lets the anthropomorphic
seashell shine on screen and enough life and relatability to tug the audience’s heartstrings in
multiple directions until they melt from all the cathartic warmth. Marcel exudes a spirit of
resilience that is fueled by the qualities that make us most human, those vulnerable wants and
needs to share our lives through creativity and expressions of giving and nurturing those and that
for which we care most, our immediate and our chosen family. Whether expressed inside or
outside our shells, Marcel the Shell with Shoes On, is one of those rare, once every few years
kind of movies that make us remember the simple things in life, why we care about them and
how we all have that in common. We all have a shell, and sometimes it takes a lot to remember
that, in this case, it took a walking and talking shell to do so.