CubeSats—tiny satellites that operate individually, stacked together, or in unison—advance our knowledge and capabilities in space with their increasingly complex components and functions. The first specifications were developed in 1999 by California Polytechnic State University and Stanford University. In 2003, the first CubeSat was deployed into space, and in 2015 more than 120 were deployed. Today space concerns that are public such as National Aeronautics Space Administration (NASA), and that are private such as SpaceEx, all around Earth are launching CubeSats in large numbers. On February 14, 2017 India broke a record by launching 104 from one rocket.

“As we thought about building satellites we realized we could do it in a way that was a standard satellite form factor,” said Andrew Greenberg, Portland State Aerospace Society (PSAS) co-founder and associate professor in the electrical and computer engineer department at PSU’s Maseeh College of Engineering and Computer Science. The technical standard is 10x10x10 centimeters, which is one meter of volume. Currently, PSAS is building OreSat 1, which is two cubes stacked together.

“Portland Aerospace Society is the most interdisciplinary group in the school of engineering at PSU,” said PSU business major Risto Rushford. Everyone is welcome at PSAS.

“Everything we do, our software, our mechanical designs and our electrical designs are all on the Internet. We’re very collaborative. Other groups have used our designs,” Greenberg said.

“We have a primary spacecraft ‘backplane,’ which contains the solar cells and their power modules that control the power coming off the solar cells, there are the battery modules, and there’s the C3 board, or the C3 controller, and that is the command control and communications board,” said Glenn LeBrasseur, communications lead for OreSat and PSAS, and industry advisor for OreSat and PSAS.” “They have the ability to provide power to tell the health of the spacecraft, to direct it to do something like turn on or off a system or a science mission, or go into battery mode. That’s the housekeeping part.”

Based on its three missions OreSat has gained acceptance by NASA’s CubeSat Launch Initiative for deployment in June 2019 from the International Space Station into low Earth orbit. 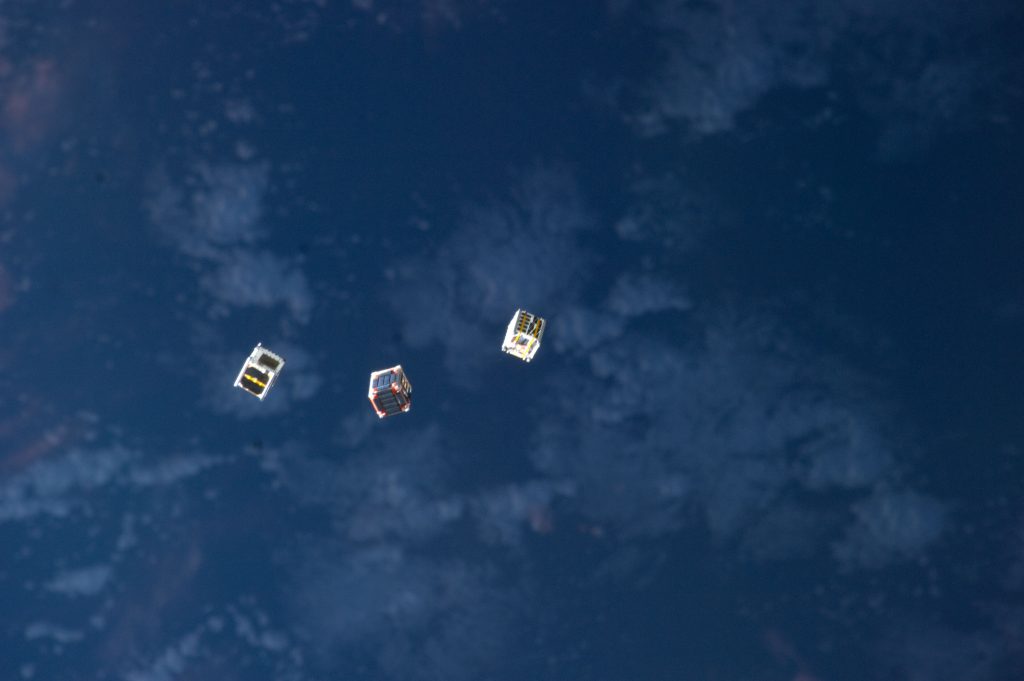 “OreSat’s mission is to not catch fire in space,” Greenberg laughed, and then more seriously said, “Once we get into space the idea is to beam live video of space down to Oregon schools. High school students are going to build their own antennae and they’re going to use Smartphones and laptops and the antennae to receive a signal of the satellite as it goes overhead. It’s like a 400 kilometer selfie.”

OreSat is an educational outreach program to the state of Oregon. To high school students “it teaches communications, tracking satellites, pointing antennas, the complexities of imaging—because when you have a fairly high resolution camera imaging a specific item that’s moving at 27,000 miles per hour it might be blurred,” said LeBrasseur. The satellite will have a very small footprint over a point of the Earth while in low Earth orbit. “Think of a flashlight shining on the wall, there’s going to be a region lit up. That disc or that footprint is going to pass by in about 15 minutes or less; we’ll get one or two of those then we won’t see it again for 18 hours, then we’ll see it again for one or two passes.”

PSAS will collaborate with other ground stations on Earth who will be in the path of OreSat’s ground track. LeBrasseur named a few: University of Colorado, University of Illinois and Georgia Institute of Technology.

The secondary mission of OreSat is to carry climate science experiments, including a set of cameras from University of Oregon that are designed to look at the topside of cirrus clouds.

The third mission purpose is product evaluations and to give a product flight heritage. Specifically, OreSat will test the usefulness of the solar cells it’s using, which were donated by Alta Devices.

“The spacecraft itself is a unique design that we have built to allow cards to be plugged into it so the whole spacecraft doesn’t have to be taken apart each time a change is made or we want to test a particular part,” LeBrasseur said. “What’s unique about it is that we’re designing it for the purpose of the module itself, but it has to still fit the CubeSat design specification.”

The advantage of the design specification is that when a builder goes to certify its CubeSat, or get it integrated into a launch mission, it fits into a standard box or slot. That means when there’s a little bit of room on a space station or a rocket then a CubeSat can easily be tucked in.

“Our satellite will be in one of the little cargo hold cases,” LeBrasseur said. “They’ll load it on ISS like cargo on a jet airline.” When the time comes, “they’ll open that case, take it out, stick it in the little launcher thing, press the button, and PSSHHH, it’ll launched out the back.”

After six to nine months in low Earth orbit OreSat will re-enter Earth’s gravity and disintegrate.

Subsequent OreSats have other destinations. “We’re always looking for science missions that are useful,” LeBrasseur said. “We’d like to go into geosynchronous [Earth-centric] orbit, where we will need to have some kind of propulsion to maneuver, so that it can scoot out of the way of something or position in a certain way. After that we will maybe go between geosynchronous and the moon. There are lots of fun things out there. There are asteroids, vibrations points or L-Points that are basically gravitational wells where things tend to accumulate. If we went to an L-point and hung out there for a while and simply put a camera out to see what kind of junk is accumulating, that might be fascinating. Everyone is going to Jupiter. We might go to Mars first. Who knows?”

L-Points, or Lagrangian Points, are points between the sun and orbiting planets where there are quirks in the centripetal force, which create pockets of balanced gravitational pull, explained Rushford and Kenny McElory of PSAS explained. There are five L-Points. L4 and L5 are the most stable, and have accumulations of Trojan Asteroids.

In May 2018 NASA plans to deploy two highly developed CubeSats, called MARCO, with the Mars mission large spacecraft Insight. MARCO stands for Mars Cube One, and they will each be about the size of a cereal box. Andrew Klesh, chief engineer for Interplanetary Small Spacecraft at the NASA Jet Propulsion Laboratory, explained in a NASA JPL live public talk that ninety minutes after Insider launches the MARCOs will deploy, fly independently for the six-and-a-half month journey then, without entering Mars’s orbit, monitor and report back to Earth Insight’s landing on Mars. To date, no Earth deployed spacecraft has successfully landed on Mars. Information supplied by the MARCOs will improve the success of subsequent missions to Mars and beyond.

Relative to spacecraft such as Insight, or Juno—which in 2011 cost $1.1 billion, CubeSats are inexpensive. For that reason, they can be deployed into high-risk situations. Where Juno could do only one fly by of Pluto, multiple CubeSats can do multiple fly-bys.

CubeSats may be built for exploratory, educational, military and commercial purposes. They collect a lot of information, but on a focused subject. A range of possible components for any one CubeSat includes sun sensors, solar panels, solar rays, telescopes, laser range finders, horizon sensors, star trackers, pointing sensors, multiple cameras and antennae for transmitting information back to Earth. Also, CubeSats intended to operate beyond low-Earth orbit need self-propulsion, which may include cold gas systems, solar sails, iodine systems, electric ion burners and more possibilities not yet past the let’s-see-if-this-will-work stage.

As technology advances CubeSats will last longer and go faster and farther. Their in-space performances and demonstrations are expected by NASA to actively advance the capabilities needed to take humans farther into space than ever before.