Photo: A netsuke carving at the Portland Japanese Garden is on display under a small magnifying glass, bringing to life the fine details of the piece.

From upper-class warriors to farmers, to artisans and the lower merchant class, the kimono was worn by all manner of people in 17th to 19th century Japan. One functional aspect of the kimono created a dilemma, however: it had no pockets. This is how small, intricately detailed carvings commonly made of ivory or wood called “netsuke” came to be a fashionable and functional solution to the problem.

The Assistant Director of Exhibitions at the Portland Japanese Garden, Sarah-Kate Nomura, described netsuke carvings as “a tiny sculpture that’s small enough to fit in the palm of your hand. They were used as a counterbalance, or a toggle to hang pouches or boxes [inro] from a men’s kimono, and that’s how they carried around their everyday essentials like medicines, money, or tobacco sets.”

The Japanese Garden is an idyllic place, tucked into the upper West edge of downtown Portland. In many ways, the slow growing scenery and patient creation of the space is a large scale version of the attention to detail found in traditional netsuke carvings.

The Garden’s curator, Hugo Torii says “every gardener, after spending years mastering the art of manicuring nature through the act of being a mere intermediary, would try to leave their own mark in some discrete way. The forgotten art of netsuke from Japan points to the innate human drive for expression and creativity, much akin to the way we crave nature.”

During the Edo period, the upper class shogunate and samurais ruled the populace with strict guidelines. Conspicuous wealth was frowned upon, so people had to find new ways of showing off their individual style. “They were quite strict about people being homogenous in their dress, and definitely not having anything flashy or showy,” Nomura said. “But the lower classes were actually pretty wealthy, and they were merchants and artists, so they were eager to express their status or personality in some way. The netsuke were kind of a loophole for that because they were technically functional, and they could be tucked away a little bit.”

Many carvings in the exhibition are brought to life for guests through small magnifying glasses inside each exhibit case, revealing the meticulous detail carved into each piece. As with art of all types, these netsuke were created to represent various aspects of daily life. While men predominantly created netsuke—apprenticeships were passed down through the patriarchal line, and they were not worn by women—some women actively sold their own work, and were often represented in the carvings performing their common work roles as well.

“It shows a glimpse into everyday life for a woman at the time,” Nomura said. “There is one image of a woman beating a cloth, and she’s making soap really smooth and pliable; she’s a craftsman.”

Real and imagined animals in the collection take form as Chinese zodiac symbols thought to represent human characteristics: rats (intelligent, adaptable), monkeys (creative, witty), puppies (loyal and sincere), as well as shishi—lions believed to repel evil spirits. Despite their isolation, as Edo Japan’s trade policies opened to other parts of the world, so did Japanese artists’ curiosity about newcomers to the island. Dutch traders who lived in Japan are commonly characterized as tall, thin foreigners in unique clothing and hats, similar to how they are portrayed in contemporary woodblock prints. Common folklore of the era contributes heavily to themes carved into the netsuke as well. 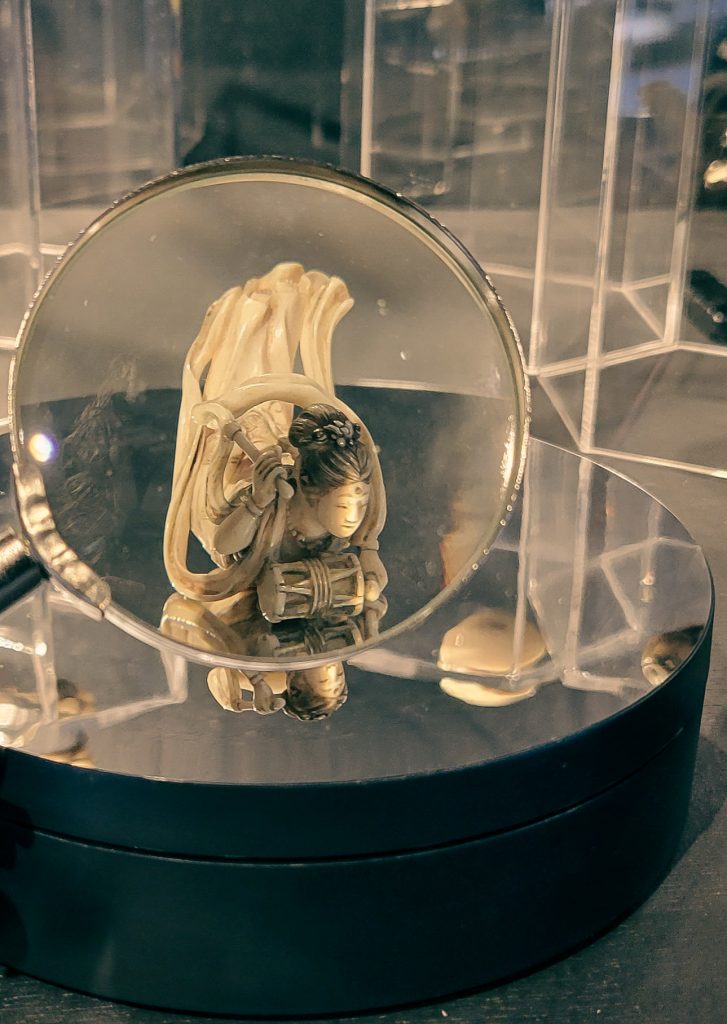 Nomura said the traditional netsuke “take at least a couple of weeks to make just a single piece, and people would have a pretty elaborate setup. You’d need a piece of wood that has a fork in it to rest the netsuke on, and they would often hand make a huge set of tools to make the different types of cuts.”

Today, Disney sells plastic, novelty netsuke that attach to cell phone cases, and Marvel has a comic book series that tells the story of Wolverine, a character who is transported back to 1100’s Japan after finding a netsuke from the samurai era. While modern collectors of traditional, handcrafted netsuke may not be in the market for mass produced, plastic charms, the allure as a souvenir is relatively similar today as it was in Edo Japan—minus the time and effort put into their creation. The artisanal carvings were not even found in European art galleries until around 1880, a few years after feudal samurai rule ended in Japan and tourists began collecting them. But today, collections are on display in fine arts galleries around the world, offering collectors and appreciators a look into worlds created by true artists in Japan. The netsuke on display now through April 17 is a selection from 200 donated items that are now part of the Portland Japanese Garden’s permanent collection. A walk through the museum is included in general admission to the garden, which is a unique experience in its own right. 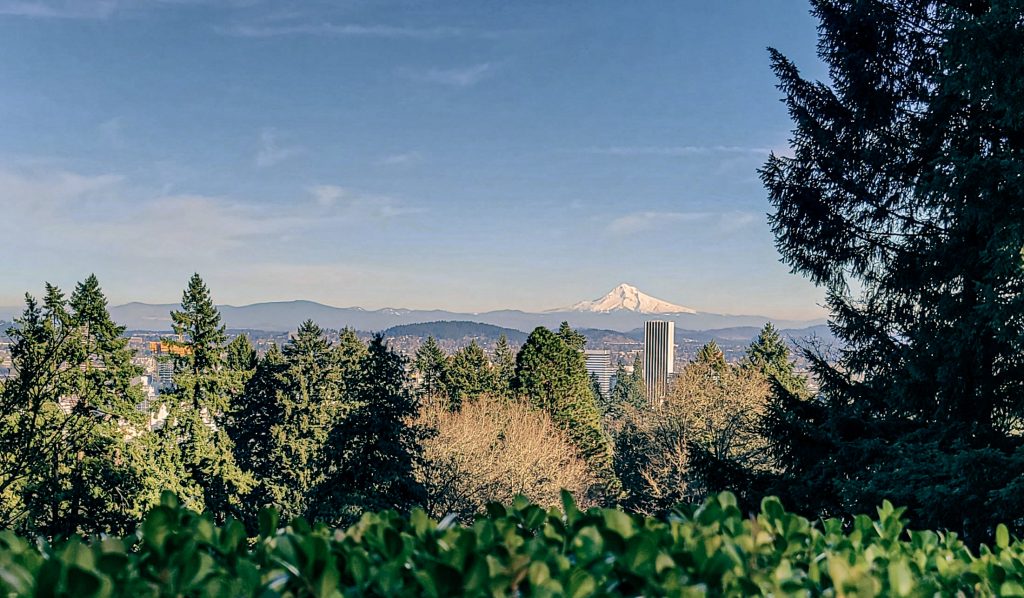 A short jaunt up the hill from the city center and through a small residential neighborhood, the Japanese Garden offers a reprieve from the nearby noise and pollution of the city’s busy shopping district at Northwest 23rd Ave. Waiting in line at the entrance to the garden, one can enjoy cleanly designed water features and begin to practice the kind of calm and patience that is essential to fully appreciating what the space has to offer. Just past the ticketing gate, visitors can catch a shuttle or take a short, steep hike, inhaling the greenery and shrubbery that wind upward, exhaling into the wide open cultural village courtyard.

While giving a recent tour of the garden grounds, Will Lerner said the cultural village was designed by the influential Japanese architect Kengo Kuma, who is renowned for his design of the Japan National Stadium in 2020. The courtyard and its adjacent cafe, gift shop, and castle wall in the distance give the courtyard its open, minimalist feel. Moss is featured heavily on the upper half of the buildings’ porcelain rooftops, directly above their patinated metal lower halves.

Guests exit the cultural village through the Nezu Gate and enter Flat Garden—the first area developed here in the early 1960’s—a peaceful, raked sand and stone garden made of gravel imported from a Kyoto riverbed. A Japanese method of gardening called miegakure, or “hide and reveal,” is widely utilized in the layout of this space. Around any corner, at the top of a set of steps, or through another gateway could be an entirely different use of color or texture, which builds a sense of mystery and appreciation of the moment throughout the tour of the garden.

The Pavilion Gallery opened the day Mount St. Helens erupted in 1980, and from this vantage Mt. Hood appears as borrowed scenery, sitting like a cap atop the roofs of the city’s tallest buildings. A short walk around the corner from Flat Garden, and through Wisteria Arbor is the Sapporo Pagoda—a five tiered, 18-foot-tall pagoda gifted to Portland from its namesake sister city in Japan. In the spring and summer, trees and plants set a green background to the sculpture, hiding a peaceful pond until visitors reach the short walking bridge that waits below. Rustic, but kempt gardens are intended to slow the pace toward manicured stone and wooden walkways where a dozen koi feed underneath a small waterfall. The path bends around Douglas Firs and Cherry Blossoms through the Moon Gate, whose asymmetrical doors open or close depending on the moon—the wider right is opened on a full moon, the narrower left is opened for half-moons.

Endless moss, trees, and bushes; all shades of green surround visitors sitting in meditation or hiking up the short hill revealing a juxtaposition with the strikingly gray, karesansui zen garden.

The rock sculptures are open to interpretation, but are meant to stimulate the mind through the use of blank space. Four small stones kneel reverently toward a proud, larger stone as three yet smaller ones look on; a group of tiger cubs follow their mother; fish are frozen in time as they dive simultaneously, their tails caught just above the water.

To know is not the point. The purpose here is to slow down and breathe; to carve out time, and to be patient.