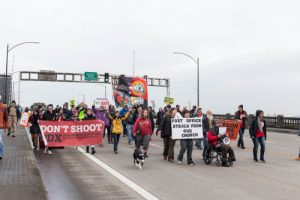 “Fuck the police,” said Teressa Raiford into the microphone during an hours-long public talk given this past Martin Luther King, Jr. day near the entrance to downtown Portland’s Justice Center.

Raiford, lead organizer for Don’t Shoot Portland (DSP), was at the foot of the steps to the Justice Center’s front door from around 11 am to 2:30 pm to speak during a “soapbox” event essentially kicking off a day of protests. This day of protests saw a people’s solidarity march starting at the VOZ MLK Workers Center that would ultimately merge with a subsequent fair housing march originating at Portland City Hall.

“He created a blueprint for us to do the same thing. He told us that nonviolent direct action can help us show the moral corruptness of the systems in which we are fighting against,” Raiford said, hinting at the accusations of brutality and excessive force used by police departments nationwide when responding to protests that emerged in the wake of the August 2014 killing of Michael Brown by former Ferguson Police Department officer Darren Wilson.

The decision to not indict Wilson for the killing drew widespread outrage and gave many a reason to continue protesting the decision to this day, with additional fuel added to the fire by the April 2015 deaths of Walter Scott and Freddie Gray. Baltimore State attorney Marilyn Mosby said Freddie Gray’s arrest was illegal, and that even though police found a knife on him, the knife was also legal, according to the Wall Street Journal. Gray later died in police custody under suspicious circumstances, and the six officers involved are now on trial for various charges, with four facing involuntary manslaughter charges. In North Charleston, S.C. video emerged of Walter Scott being shot in the back by former North Charleston police officer Michael Slager. Also in the video, Slager—who had previously radioed in that Scott had grabbed his taser—appears to plant his taser near Scott’s body in what would appear to be an attempt by the former officer to help justify the shooting. According to CNN, Slager is out of jail on bond awaiting his trial where he faces a murder charge.

“Those systems have to see themselves. All of the protests that we’ve done, we’ve done them as nonviolent direct action protests,” Raiford said, who also mentioned that protests organized by DSP have been shut down by “illegal systemic operations” that “violated our freedom of speech” and “our freedom to assemble.”

“When we say ‘fuck the police’ we ain’t saying like we really wanna fuck with police, we are saying we don’t like the policing system and it needs to be dismantled. Maybe not completely, I don’t know how that works but I know that in my lifetime as much as necessary [it] needs to come down. Anything that’s humiliating, or discriminating or violating humanity should not be a part of serving and protecting people, period,” Raiford said.

In January 2015, The City of Portland’s Citizen Review Committee voted in a 5-3 split that the Portland Police Bureau’s (PPB) December 2014 “kettling” (a police tactic where a large number of police are used to encircle protesters so that the protesters’ movements are completely restricted) of a DSP-organized protest was unconstitutional.

PPB’s use of flash grenades to control protests, as well as their repeated use of pepper spray on protesters during May Day 2015 have also been called into question.

On the birthday of Martin Luther King, Jr. it is only fitting that a march would begin at a property along a boulevard named for him. Billed as “A People’s Solidarity March,” people from all walks of life converged at the VOZ worker’s center in the early afternoon, where various people spoke in support of the center and how important it is in helping local laborers to find fair employment.

A person identifying himself as Juan spoke to the crowd that had gathered and said that VOZ is a “great spot” and the people who come to VOZ have “the same dream: a good life, food on the table, freedom basically.”

Raiford had packed up at the Justice Center and was also at VOZ, where she announced to the crowd after giving a brief speech “in honor of Dr. King, we will be taking the streets.”

The group then exited VOZ’s parking lot where the group started its roughly 100-person strong march south on Martin Luther King, Jr. Blvd, eventually taking a right on East Burnside where the group would use the entirety of the westbound lane to march over the Burnside Bridge, all the while alternating between chants of “no more, no cause” and “house keys, not handcuffs,” among others. These chants about housing stem from a housing and homelessness crisis that Portland is currently engulfed in, with the homeless facing forced removal from their camps at the hands of local authorities, and renters facing no-cause evictions as well as massive rent increases that serve as de facto evictions.

A diverse group, at the front of the march was a man known as Porkchop. Porkchop was at the march to protest against the United States Postal Service (USPS) for seizing a package of “sacramental” marijuana from a member of his church, Oklevueha Native American Church (ONAC). He and other members of ONAC who attended the march intended to ceremoniously serve the USPS in person with a lawsuit ONAC had filed that day. Though due to time constraints, Porkchop was unable to deliver the paperwork.

Once over the bridge, the march stopped at Right 2 Dream Too (R2DT)—a non-profit homeless shelter situated near the Northwest 4th and West Burnside entrance to Portland’s Chinatown—where several people spoke about how critical R2DT is for Portland’s homeless population.

“This place right here saved my life!” Porkchop said. “I’d like to see the mayor come down here and sleep one night in this place…we’ll share a tent with him.” Porkchop ended his speech with a call to “free the weed.”

The march then carried on south down the transit mall, gumming up Trimet’s MAX and bus service on its way to merge with the fair housing rally and march that was set to convene at Portland City Hall.

Approximately 150 people attended the rally and march organized by Portland Tenants United (PTU), a local tenants union that advocates for renter’s rights. PTU recently got a no-cause eviction against a 73-year-old man who had been living in his apartment for 30 years dismissed “through the mere threat of bad publicity,” said PTU organizer Austin Rose. “The housing situation in Portland has gotten to such a crisis that for the last year I have been working with different groups to organize in the fight [for] housing justice. I firmly believe housing is a human right and we should have housing for all.”

The hour was late, the sun had set on Portland City Hall, and the housing march was set to begin. The group filed out and made its way to a building owned by American Property Management (APM) on the corner of Southwest 5th and Clay, where APM was served notice by the march that their housing practices need to change. As the marchers chanted “we won’t settle for small improvements, you can’t evict a tenants movement,” several people were seen spray painting a stylized “N” that is the symbol for a squat, as well as the anarchist’s “A” on the building’s windows.

At least two buildings were tagged before the protest reached the Multnomah County courthouse, where it was also served with notice by protesters that its operations violate Portlander’s rights to “dignity and security in our own city.” Masked individuals also spraypainted the doors of the courthouse with the stylized “N,” the anarchists “A,” and a sad face. Apparently upset with the police, another masked person spraypainted “ACAB” on the courthouse walls. “ACAB” is an acronym for “all cops are bastards.”

The march culminated at the Justice Center, where it was also served notice by the group, but not spraypainted.

Regarding the spraypainting of several buildings, PTU organizer Gabriel Erbs said the march was a public event and that they are unable to control who shows up and who doesn’t, but also said that PTU does not condone those kind of tactics.

Speaking generally about the march, Rose said it “went really good. We had a lot of people out in the streets, and we were able to get our message across, and the people were united and that’s the thing that really matters.”

“The march went well because the people involved, they have heart. If the youth [are] coming out to fight against the government then there is a problem,” Porkchop said—referencing young attendees at the march.

Portland State University Student Union (PSUSU) member Alyssa Pagan, who also participated in the march with other PSUSU members, said that “the march went well. We were able to take the streets the whole way and call out the property management companies that are exploiting people in Portland.”

Written By
Mike Bivins
More from Mike Bivins
If you own a gun, are interested in guns, or just want...
Read More